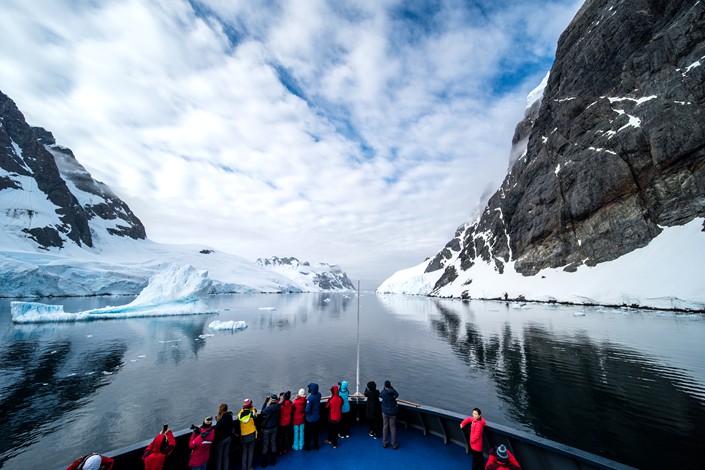 A year has passed since I published a piece in Caixin highlighting the opportunity for China to take leadership in 2020 on climate and biodiversity protection in Antarctica’s Southern Ocean. Since then, the year did not unfold quite as planned (to put it lightly). Many of us are still in the grips of this global pandemic that has caused so much suffering all over the world and has cruelly reminded us of how at odds we may be with the natural world. Progress has been stalled on many things, including urgent environmental action, with many key meetings related to climate and nature protection either postponed or moved to a more limited online format. It has meant we have lost a year of action, when science tells us we have no time to lose regarding tackling the climate and biodiversity loss crises.

In the backdrop of all this uncertainty and upheaval, it was positive to hear that China agreed in September to achieving carbon neutrality by 2060. This is a noteworthy commitment by the world’s second-largest economy and largest population, and a significant one during such economic and financial turmoil. We cannot underestimate the impact climate change and biodiversity loss are having on our planet and human well-being, as well as economically. We are maxing out our planet- with recent estimates suggesting we need 1.6 Earths to maintain our current way of life. That is why China’s commitment as a key economic power to ecological civilization, cutting their greenhouse gas emissions, as well as hosting an incredibly important biodiversity conference later this year in Kunming, South China’s Yunnan province, are major milestones in a planetary rescue plan. But this plan must also include the ocean.

Bold climate action must slash greenhouse gas emissions drastically and put in place technologies that reduce our fossil fuel addiction and ensure a more sustainable and circular economy. Action is also needed to help us adapt to and mitigate adverse climate impacts, and to recognize the key role the natural world plays to help us achieve these goals. Up until now little political attention has been given to the important role the ocean plays in regulating our weather and the climate. As a gigantic natural carbon sink, the ocean has already absorbed about a third of the additional carbon dioxide we have put into the air and 90% of the excess heat caused by increased carbon emissions. But all of this comes at a significant cost to ocean health and planetary resilience, and we must take action to safeguard our blue planet so it can continue to safeguard us.

The vast icy continent of Antarctica that is surrounded by its mighty Southern Ocean has helped keep our planet cool and liveable. Its circumpolar ocean current disperses nutrients to the rest of the global ocean-feeding the fish that feed the world. It is best known for its amazing wildlife such as whales, seals and penguins. However, recent scientific studies have spotlighted some less iconic but equally amazing inhabitants that play a significant role in absorbing carbon.

According to a study from 2019 large numbers of Antarctic krill, tiny shrimp-like creatures that feed on plankton near the ocean surface are able to transport at least 39 million tons of atmospheric carbon per year into the deep ocean through their waste. To put that into a bit of context that is the equivalent weight of 1 billion emperor penguins. And the significance of Antarctic marine life for the climate does not stop with krill excrement! While warmer and coastal habitats such as mangroves and seagrasses have been highlighted as significant storers and sequesters of carbon, recent research shows that due to the sheer size of the Southern Ocean, the carbon stored on the Antarctic continental shelf is significant. A study last year estimated that seafloor organisms currently store up to around $2.27 billion worth of carbon — and so need to be protected from harmful fishing practices.

We still are not sure what the impact would be on the atmosphere and ocean from removing krill and disrupting seafloor creatures, or how climate change will further exacerbate this. One thing is for sure, krill and seafloor ecosystems are important in supporting life and storing carbon in the ocean. Given the importance of Antarctica and its marine life as an engine for a stable climate and the health of the rest of the ocean, protecting these places should be a key step in building global marine resilience to climate change.

Joint problems call for joint solutions and global collaboration. President Xi ended his speech at the U.N. General Assembly in September with the words “Together, we can make the world a better place for everyone.” One of the key places where China can help make this a reality is the global commons of the Southern Ocean, by giving its support for further protection. Currently there are three large-scale marine protected areas up for designation in the East Antarctic, Weddell Sea and Antarctica Peninsula. When designated together, they would result in the greatest act of ocean protection in history, safeguarding and building resilience in almost 4 million square kilometers and protecting a further 1% of the global ocean. To get these proposals over the “finish line” the agreement of all 26 members, including China, of Antarctica’s ocean conservation body (CCAMLR) is needed at its annual meeting in October.

This past year of fighting the pandemic has shown us that when leaders’ backs are against the wall, they can take swift, bold and drastic measures to help tackle a crisis. We need to see the same leadership and courage to tackle the biodiversity and climate crises, to ensure a healthier future for our planet and for ourselves.

Granted, current geo-political tensions between key Antarctic players such as China, the EU, the U.S. and Russia, make progress a challenge. However, Southern Ocean protection can be the common ground that countries can unite around in the fight against the climate crisis and biodiversity loss. Sixty years ago, Antarctica united countries at the height of the Cold War, through the signing of the Antarctic Treaty that dedicated the continent to peace and science. We can put differences aside and make history together once again for the benefit of our planet. Some key environmental meetings coming up in the next few months offer a platform for bold announcements, starting with the U.S. Climate Summit hosted by President Joe Biden, on Earth Day on April 22. For China, this could be an excellent opportunity to take to the global stage and give the green light to historic Antarctic ocean protection in 2021.

Pascal Lamy is a former director-general of the World Trade Organization and currently president of the Paris Peace Forum.