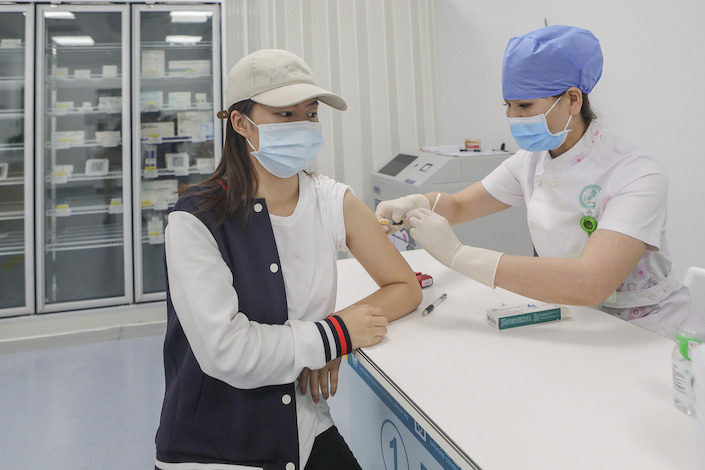 An average of 3.5 million shots a day have been given for the past week, according to data released by the National Health Commission

(Bloomberg) — China is expected to approve BioNTech SE’s Covid-19 vaccine in June, according to Ker Gibbs, the head of the American Chamber of Commerce in Shanghai.

The Shanghai government told the group, known as AmCham, that it expects the shot to be cleared “somewhere in the June time frame,” he said, citing a conversation with Vice Mayor Zong Ming.

The shot, which will be rolled out by Shanghai Fosun Pharmaceutical Group Co., is likely to be the first of the highly effective mRNA vaccines approved in the Chinese mainland. Its availability will help alleviate supply shortages facing the world’s most populous country. China has a target of vaccinating 40% of the nation, or 560 million people, by the end of June.

Supply shortfalls recently slowed the pace of China’s immunization push, following an acceleration in late March spurred by Vice Premier Sun Chunlan’s call to ramp up a nationwide vaccination campaign. An average of 3.5 million shots a day have been given for the past week, according to data released by the National Health Commission, while the country needs to administer more than 5.3 million doses a day to meet its June target.

With supply remaining a pressure point, authorities have devised several ways to make vaccinations available to more people. They include prioritizing distribution in densely populated and developed cities and extending the interval between the two doses needed to achieve full immunization.

Fosun secured the rights from BioNTech to exclusively develop and market the shot in the mainland, Hong Kong, Macau and Taiwan. Pfizer Inc. sells the vaccine in other places. The messenger RNA vaccine works by delivering genetic instructions for making the virus’s spike protein inside healthy cells, which spurs an immune response. The mRNA shots have higher effectiveness rates than immunizations from domestic makers, including those from Sinovac Biotech Ltd. and Sinopharm Group Co.

Fosun indicated a price of roughly 1,000 yuan ($154) for two doses in December, according to Gibbs, and they haven’t had further talks about cost since then.

Around 40,000 people expressed an interest in getting the BioNTech shot in an AmCham Shanghai survey, conducted to help Fosun pre-register people.

“We’re having ongoing conversations with Fosun, and we have high confidence in their ability to efficiently distribute the vaccine once it’s approved,” Gibbs said.