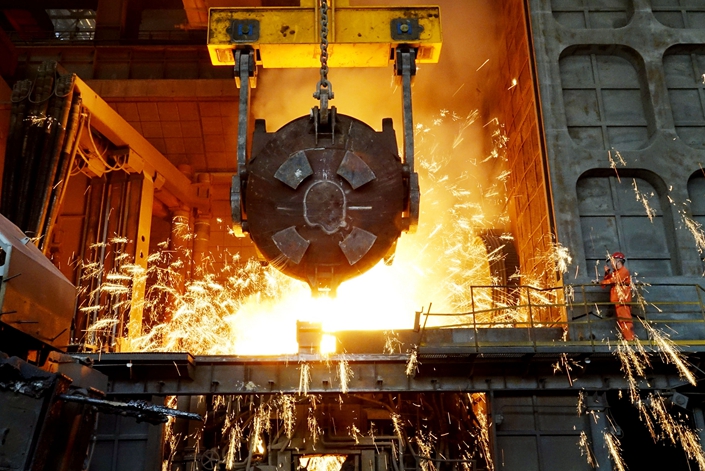 A worker surveys the production of steel at a plant of Dongbei Special Steel Group in Dalian, Northeast China's Liaoning province, on April 8, 2019. Photo: VCG

HBIS Group, the nation’s No. 2 steelmaker, shut down its works in Tangshan in Hebei province that had employed upward of 4,000 workers and ran three blast furnaces last December. Authorities said it lacked proper measures to limit pollution.

“We all lost jobs and don’t know what to do,” said a man who had been temporarily laid off. Plans call for building a state-of-the-art mill with environmentally friendly features within the city, but no specific opening date has been revealed.

HBIS is one of many steelmakers being forced to reduce capacity under pressure from local governments, which are eager to slash CO2 emissions to please Beijing. The trend is already pushing up steel prices, with higher costs spilling over to downstream manufacturers.

Tangshan last month told most steelmakers in the city to slash production by 30% to 50% by year-end. With 140 million tons of crude steel output in 2020, Tangshan was responsible for producing a little more than 10% of the national total.

The reduction is enormous. If steelmakers in the city follow the 40% cuts, the combined decrease would be roughly equivalent to the 2019 output at Nippon Steel, Japan’s biggest steelmaker.

Tangshan’s crackdown was not over. The city this month unveiled guidelines requiring steelmakers to implement strict environmental controls, including video cameras at all works and the online monitoring of emissions levels.

These are surprisingly strict measures for a city that relies heavily on the steel industry. The city also required other leading steel companies to close aging facilities, driving up unemployment.

The push to decarbonize the steel industry began after President Xi Jinping vowed to the U.N. General Assembly in September that China would become carbon neutral by 2060, part of an apparent attempt to draw interest of environmentally conscious European countries.

The steel industry accounts for 10% to 20% of China’s annual carbon dioxide emissions and is said to be the second-biggest polluter after power utilities. Slashing emissions in the steel industry plays a major role in the effort to achieve carbon neutrality.

China Baowu Steel Group, the country’s top steelmaker, in January vowed to bring down CO2 emissions from 2024 and achieve net-zero emissions by 2050. HBIS followed suit last month, targeting 2050 for its net-zero year. The two companies will focus on developing technology to use hydrogen to reduce iron ore and ditch the use of coal.

But establishing such clean technology is expensive. Not only are the costs of research and development high, but so is the cost of procuring hydrogen. This is why Beijing is promoting reduced output — which is more effective — in its quest to achieve emissions cuts.

China’s crude steel production rose 5.2% on the year to a record 1.05 billion tons in 2020 as the measures to stimulate the pandemic-hit economy fueled a rapid recovery. This year, downward pressure is mounting. Output will decline on the year, a government official emphasized at a news conference in January.

A core subsidiary of HBIS Group, HBIS Ltd., told investors Friday that it is implementing strict production limits as requested by the city of Tangshan and the impact on earnings will be announced later. The unit saw net profit drop 33% on the year in 2020 and is expected to suffer an additional hit to earnings.

Steel materials prices have surged since Tangshan announced the production cuts last month. Prices rose about 10% for hot-rolled coil, used for automotive and electronics, in the past month.

Tangshan’s biggest steel materials market was closed on a recent day. The venue was suddenly shut down at the end of last year by the authorities, a nearby shopkeeper said.

Some stores, however, continued to sell, without any license, steel products made by laid-off workers. The authorities have touted that they have wiped out illegally made steel scrap — which is said to disrupt market prices and is not included in statistics. But supply may return temporarily when demand recovers.

As China pushes to reduce CO2 emissions, production cuts will likely squeeze steelmakers, with the repercussions spreading to the auto and home appliance industries.