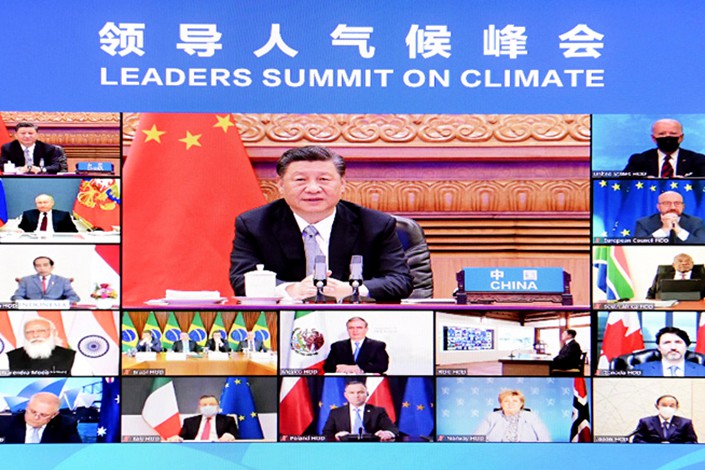 Cooperation on climate change response has become a rare bright spot in otherwise conflict-ridden international relations. At the invitation of U.S. President Joe Biden, President Xi Jinping attended the Leaders Summit on Climate via video on April 22. Before the summit, the two countries issued the China-U.S. Joint Statement Addressing the Climate Crisis. Climate change was also a hot topic at the recent Boao Forum for Asia. The international community is expected to work together to combat climate change and save humanity’s shared home. China is being proactive in its response, striving to advance high-quality development domestically and build a responsible image internationally. In the coexistence of challenges and opportunities, the key to high-quality development lies in turning the former into the latter, facilitating transformations in China’s economic structure and energy mix.

In a number of international occasions over recent years, China’s leaders have repeatedly stressed the country’s positive approach to climate change, demonstrating a responsible image appropriate for a world power. As a party to the United Nations Framework Convention on Climate Change and the Paris Agreement, China has actively participated in international cooperation and made significant progress in reducing its carbon emissions. Compared with 2005, China’s CO2 emissions per unit of GDP had decreased by 48.1% in 2019; energy consumption per unit of GDP dropped by 42.5% over the same period. As the domestic energy mix continues to be optimized, the proportion of coal in primary energy has plunged from 72% to 57.7%, while the proportion of non-fossil energy in primary energy surged from 7.4% to 15.3%. For an emerging economy currently undergoing a major transformation, such achievements do not come easily. Nevertheless, China remains the largest emitter of carbon, its emissions accounting for one-third of the global total. Its carbon emissions per unit of GDP is also higher than the global average. For China, reducing carbon emissions is a daunting task.

At the General Assembly of the United Nations in 2020, China’s leaders announced that the country would aim to peak CO2 emissions by 2030 and achieve carbon neutrality by 2060. Whether from a national or global perspective, this constitutes a major strategic decision at the level of policymaking and a solemn commitment to the international community. Promises must be kept; action must be resolute. China should formulate and implement its development plans in line with its CO2 emissions peak and carbon neutrality goals. Taking coal consumption as an example — according to existing plans, China will strictly control the growth of coal consumption in its 14th Five-Year Plan period and gradually reduce coal consumption in its 15th Five-Year Plan period. However, in light of the government’s latest commitments, some experts suggest that the relevant targets and content of the 14th Five-Year Plan be strengthened. This suggestion is well worth the relevant departments’ consideration.

Actively responding to climate change is an inherent requirement for China’s high-quality development; high levels of pollution, energy consumption and emissions must be eliminated if economic development is to be sustainable. Reducing carbon emissions will inevitably be detrimental to some industries, enterprises and employees, but such short-term impacts are inevitable in transformation. More importantly, reducing carbon emissions is itself an important development opportunity with the potential for countless investment opportunities. Several studies have concluded that if it is to reach carbon neutrality, China will require investment at the scale of more than 100 trillion yuan ($15.4 trillion). Considering the huge gap in financing at present, green finance and the carbon emissions trade show great promise. China particularly requires green and low-carbon transformations in energy, manufacturing, construction and transportation, and related technologies are in urgent need of breakthroughs.

The response of all levels of government to climate change also requires continuous improvement. So far, China has made more use of the administrative overcapacity-cutting measures to reduce carbon emissions. While the results have been remarkable, this top-down approach brings with it high social costs. Most notable is how achievements in emissions reduction have become an indicator for evaluating political performance, how growing targets cascade down the chain of command and how the one-size-fits-all approach forces reductions in relevant capacity, leaving employment and people’s livelihoods to feel the brunt of the impact. Moving forward, efforts should go toward designing positive incentive mechanisms — for example, China should focus on the economic and energy transformations and use fiscal, taxation and financial measures to guide enterprises to transform independently. When it comes to addressing climate change, two challenges to be overcome are how to harness the decisive role of the market in resource allocation as well as the role of the government.

China’s process of carbon emissions reduction should also be a transformation in the momentum of economic growth. If the old economy is suppressed by administrative measures before the new economy is strong and stable enough to take its place, then we will see China’s greatest climate change risk forming right before our eyes. In recent years, many experts have called for preventing premature de-industrialization. Their concerns are not unfounded. In addition, the Mastercard Caixin BBD China New Economy Index, which tracks high human capital investment, high-tech investment and asset-light industries, exhibited a fluctuating downward trend from 2016 to 2019. This reflects enterprises’ conservative attitude toward technological innovation and R&D investments. This conservatism is undoubtedly affected by the macro-economy; still, it will certainly create resistance for the emissions reduction drive.

Effectively responding to climate change and advancing international cooperation will depend on a good national mentality. Climate change is a contentious topic with long-standing doubts and debates. More than a few people still believe it to be a “trap” laid by developed countries to hinder China’s development. Thankfully, China’s policymakers are well aware that climate change is more than a political reality and demands its own response. Still, there are some who feel that making fewer commitments in international negotiations is a sign of greater strength and patriotism. Such an insular idea will inevitably hinder the implementation of China’s climate goals and programs.

The Glasgow Climate Change Conference will be convened late this year, and the whole world is keeping a close eye on China’s position. Addressing climate change is not a simple matter of ecological protection. For China, it involves such complex topics as the modernization of national governance and building of an innovation-oriented country. It is also bears significance on how citizens view China’s relationship with the rest of the world. If the challenges of climate change can be turned into opportunities — if we can grasp the initial economic and social benefits — then a virtuous cycle can be formed between a national “climate awakening” and the goals of carbon emissions reduction.