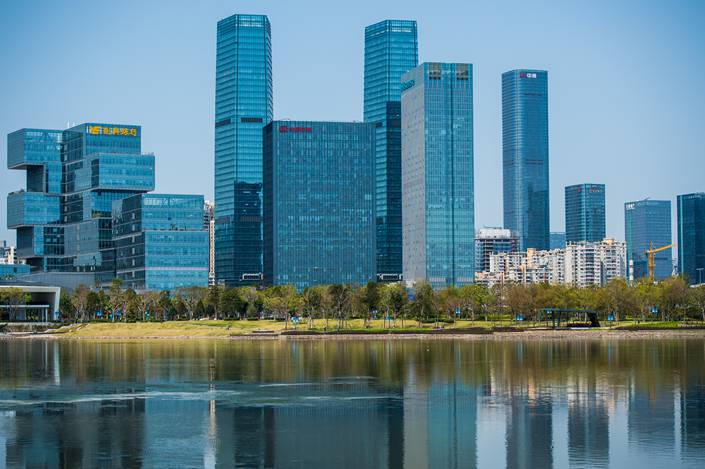 The economic divide between China’s southern and northern areas has grown over the past decade, according to a Nomura report released on Tuesday. Photo: VCG

(Bloomberg) — The economic divide between China’s prospering southern regions and lagging northern areas will continue to widen in coming years, with huge implications for growth, debt and policy making, according to Nomura Holdings Inc.

The gap between the north and the south has grown over the past decade, with southern provinces benefiting from export dependence and the internet boom, while resource-rich northern regions were dragged down by slower fixed investment, falling commodity prices and population migration. Nomura estimates that northern China’s share of the national economy shrank to 35.2 percent last year from 42.9 percent in 2012.

The pandemic has worsened the divide and latest gross domestic product data show regional disparity in the recovery too. Coastal regions with exports and private firms playing a bigger role in the economy have had a firmer rebound than land-locked provinces, according to latest provincial GDP figures.

Weaker growth in the north has meant rising fiscal pressures and debt. More than 60 percent of bond defaults in the country came from northern China in 2020, with the level rising significantly from 2019, Nomura economists led by Lu Ting wrote in a report Tuesday. The ratio of local government fiscal revenue to fiscal expenditure in the north was 42.7 percent in 2020, compared with 51percent in the south, suggesting a heavier reliance in the north on transfer payments from the central government, they said.

Low birth rates and net population outflows from the north also suggest the divide may persist in coming years. Nomura estimates the average annual population growth for the north was only 0.3 percent from 2017 to 2019, well below 0.8 percent growth in the south.

Nomura divides northern and southern China by the Qin Mountains and Huaihe River Line, with 15 provinces and cities in the north, such as Beijing and Hebei, and 16 in the south, including Shanghai and Jiangsu.

The regional gap is expected to worsen as China looks to reduce carbon emissions, cut economic dependence on the property sector and impose financial discipline on local governments, Nomura said, increasing the risks of systemic financial crises and social instability. The economy in the north is historically more investment-driven and relies more on heavily-polluting industries compared to the south.

“Beijing may need to walk a tightrope, balancing long-term targets against short-term stability,” Nomura said. The government could ease some of its anti-pollution measures, especially on producers of base materials in the north, and step up fiscal transfers to cities that are financially squeezed by tightening property measures, it said.

Regional GDP data released this month show the tropical island province of Hainan benefited from its duty-free policies in the first quarter, posting the fastest growth among China’s provinces except for Hubei, which was hit the hardest by last year’s coronavirus outbreak.

On a two-year average basis, growth in the first quarter was still below the levels seen in early 2019, indicating the economy hasn’t fully bounced back from the pandemic. For those that reported average data, Tianjin, Henan province and Inner Mongolia autonomous region were among the worst performers.