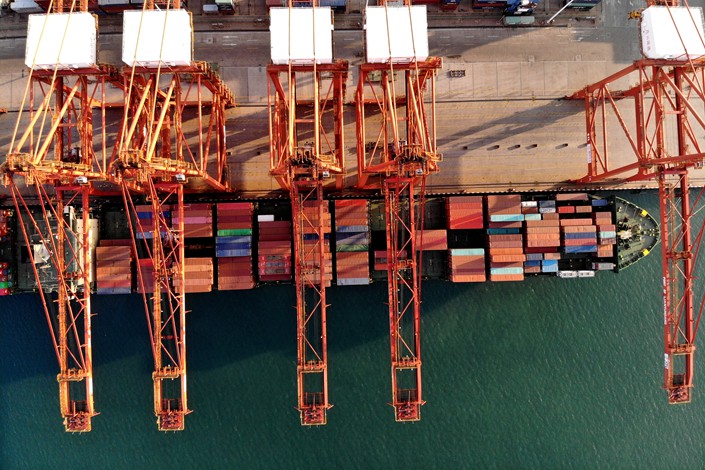 Containers get loaded and unloaded from a cargo ship on March 2 at the port of Lianyungang in East China’s Jiangsu province. Photo: VCG

China’s international trade continued its rebound from last year’s Covid-19 outbreak, with exports jumping by 30.6% (link in Chinese) year-on-year in March and imports surging by 38.1%, the fastest clip in four years.

Exports rose to $241.1 billion last month, data from the General Administration of Customs show. The pace of increase was lower than the median forecast for 37.4% growth in a Caixin survey (link in Chinese) of economists and was down from a 60.6% pace in the first two months of the year. The gain was also flattered by a low comparative base for March last year when exports fell 6.6% as the world was gripped by the coronavirus pandemic.

Imports increased 38.1% year-on-year to $227.3 billion in March, faster than the 22.2% growth for January and February combined, as commodity prices and the volume of purchases jumped. The pace of growth, unmatched since February 2017, was well above the median forecast in the Caixin survey for a gain of 23% and followed a 0.9% drop in the same period last year. China’s trade surplus fell to $13.8 billion from $19.9 billion a year ago and $103.3 billion in the first two months.

“China’s foreign trade has reported positive growth on a year-on-year basis for three consecutive quarters,” Li Kuiwen, a spokesperson of the customs administration, said at a press conference (link in Chinese) on Tuesday. “This trend is expected to continue, but needs further observation … There has been a resurgence of the Covid-19 pandemic and there are still many unstable and uncertain factors in the international situation.”

For the first three months of 2021, exports rose 49% year-on-year to $710 billion, while imports grew 28% to $593.6 billion, the data showed. The trade surplus was $116.4 billion, up from $12.8 billion a year earlier, indicating that trade in goods will make a positive contribution to GDP growth in the first quarter.

China will report its first quarter GDP data on Friday. The economy is estimated to have expanded by a massive 18.8% (link in Chinese) from a year earlier, according to the median estimate of 16 research institutions in a Caixin survey. The surge comes against the backdrop of an unprecedented quarterly contraction of 6.8% in the first quarter of 2020 when the coronavirus pandemic devastated manufacturing and consumption.

Analysts attributed the strong growth in March’s data partly to the low base of comparison in early 2020, when the Covid-19 outbreak brought economic activity in much of the country to a halt. Economists at Nomura International (Hong Kong) Ltd. said that adjusted for base effects from distortions caused by the pandemic, March exports were 21.6% higher than in March 2019 and exports in January and February this year were 32.7% higher, indicating that external demand is softening. Nevertheless, using the same calculations, import growth accelerated to 36.2% in March compared with the same month in 2019, up from 17.2% in the first two months of the year, reflecting robust domestic demand, especially for commodities, and higher international commodity prices, the economists said.

At Tuesday’s customs briefing, Li highlighted rising global commodity prices, which he attributed to the loose monetary policies implemented in major economies, including the U.S., as they try to counter the impact of the pandemic. Iron ore import prices rose year-on-year in March for the seventh consecutive month, he said. Copper ore import prices have now increased for 11 straight months, and soybean import prices were up for the fourth month in a row.

Analysts at research firm Capital Economics Ltd. said most of the growth in imports “was driven by a rebound in industrial commodities, which suggests a pick-up in heavy industry and construction activity.”

“Imports of agricultural commodities remained strong as the recovery in China’s pig stock following African Swine Fever continues to boost demand for soybeans,” they wrote in a report Tuesday. “And shipments of integrated circuits picked up further, reflecting the electronics sector’s attempts to meet buoyant demand.”

For the rest of this year, China’s goods imports will likely continue to grow due to the domestic economic recovery, Louis Kuijs, the head of Asia economics at research firm Oxford Economics Ltd., said in a Tuesday note. He also expects export momentum will remain “robust” for the rest of 2021 as the global economic recovery continues.