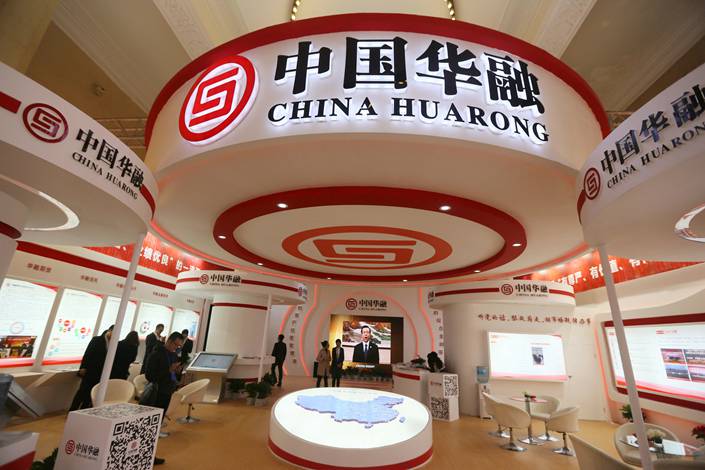 Huarong’s aggressive expansion through murky ties with affiliated companies has probably left the company with hundreds of billions of yuan of unresolved bad debt. Photo: VCG

A day after China Huarong Asset Management Co. Ltd. got its credit rating slashed, the selloff in the bad-asset manager’s overseas bonds resumed in earnest.

Fitch Ratings Inc. cut Huarong’s credit rating three notches from A to BBB on Monday, reigniting a selloff in the company’s offshore bonds that began earlier this month after it failed to publish its 2020 financial report on time.

The selloff shows that investors are worried. But their concerns go beyond the fate of a single state-owned enterprise (SOE) in the esoteric business of disposing of distressed financial assets. It even goes beyond whether they will get their money back on Huarong’s $22 billion in outstanding offshore bonds, $3.4 billion of which comes due by the end of this year, according to Bloomberg data.

Given Huarong’s relationship to the central government — it is controlled by the Ministry of Finance — and its role as a state-backed bond issuer, there has always been an expectation that the government would ride to the rescue if the company ever gets into serious financial trouble. That assumption has underpinned the creditworthiness of not only the systemically important Huarong, but many other state-owned borrowers.

Now that trouble has arrived for Huarong, market watchers have taken note that Beijing has yet to step in, at least publicly. “The government may continue to have a high incentive to provide extraordinary support, considering China Huarong’s policy role and the potential contagion risk for the refinancing of similar policy-driven GREs (government-related entities), but Fitch believes timely indication of support has not yet materialized,” the ratings agency said in its statement about the downgrade.

How Huarong’s debt struggle plays out will tell investors about Beijing’s appetite for bailing out its own SOEs, and whether they can go on assuming that a company is a safe bet based only on its proximity to the state.

Here are the five things to know to better understand the company that is capable of shaking financial markets in China and beyond.

What does Huarong do?

To understand what Huarong does, we have to get back to when it was set up two decades ago. After the Asian financial crisis in the late 1990s, China’s state-owned banks had accumulated a mountain of bad loans. To solve the problem, the Chinese government in 1999 set up four national asset management companies (AMCs), including Huarong, to take over the nonperforming assets (NPAs) of the country’s four largest state-owned banks.

Huarong was tasked with acquiring the NPAs of Industrial and Commercial Bank of China Ltd. (601398.SH). With money granted by the government, the AMC purchased the bank’s NPAs at a price equal to their book value and then ramped up its efforts to recover as much money as possible by selling or restructuring the assets.

As the returns weren’t great from handling NPAs, the four AMCs were later allowed to expand into other businesses. In 2006, Huarong started getting into a range of financial services such as banking, broking and fund management. It also got involved in more-lucrative businesses such as making loans to property developers, where bank lending is tightly restricted. Huarong also grew its business by obtaining financing with a state guarantee, issuing an immense amount of overseas bonds. In 2015, the company went public in Hong Kong.

But Huarong’s aggressive expansion through murky ties with affiliated companies has probably left the company with hundreds of billions of yuan of unresolved bad debt. Many of Huarong’s projects turned out to be problematic, providing returns in the short term, but lacking the ability to operate sustainably. In addition, Huarong’s internal corporate management has been a mess. Internal sources at Huarong told Caixin previously (link in Chinese) that some of the company’s investments were obviously given to enterprises linked to its own managers. Former Huarong Chairman Lai Xiaomin was executed in January after coming under investigation in April 2018 in what turned out to be country’s largest ever case of financial corruption.

When did Huarong’s recent troubles start?

On April 1, Huarong’s Hong Kong-listed shares were suspended from trading after the company failed to meet the March 31 deadline for publishing its 2020 annual report. That sparked concerns about the company’s financial health and sent its offshore bonds tumbling.

A Huarong executive told investors during a brief call on April 1 that the delay was because auditors needed more time to complete their review of the company’s 2020 financial numbers. He said the company was operating normally.

Two weeks after Huarong’s bond rout, the China Banking and Insurance Regulatory Commission (CBIRC), the country’s top banking regulator, said that Huarong had ample liquidity and was operating normally. The comments stopped the panic, as seen in a rebound in the prices of Huarong’s overseas bonds.

On Sunday, Huarong said (link in Chinese) it would not publish the 2020 financial results before April 30, rekindling concerns about a potential default.

If Huarong were to default, it would probably stoke contagion throughout the debt markets. Investors would likely sell off bonds issued by other AMCs or even SOEs, as they found the government no longer has the same appetite to bail out state-owned issuers as it once did. China’s wave of state-linked bond defaults last year has already rattled investors’ confidence. But a default of Huarong, a systemically important institution with an enormous amount of outstanding offshore bonds, would be strong proof of the shift of government attitude.

How much of Huarong’s debt is overseas?

At present, Huarong is capable of covering its near-term debts. On Tuesday, the company said a subsidiary repaid (link in Chinese) principal and interest on a S$600 million ($452 million) offshore bond that came due that day.

What’s going to happen next?

It is unrealistic to expect Huarong to be able to fill its financial black hole all on its own, Ling Huawei, managing editor of Caixin, wrote in a widely read commentary earlier this month. So the real question is how the Chinese government will help the troubled company.

It seems unlikely that the government would let the company go bankrupt given its size and status as a systemically important financial institution, Ling wrote.

Also, the CBIRC’s announcement that Huarong had ample liquidity implies the government is going to rescue the troubled firm, some analysts said.

Huarong has provided a restructuring plan to the government, Caixin reported in early April. If it were to restructure, it remains unclear whether every investor would be repaid in full. Some observers expect that Huarong’s bondholders — regardless of the government response — will likely have to take a haircut on their investments.