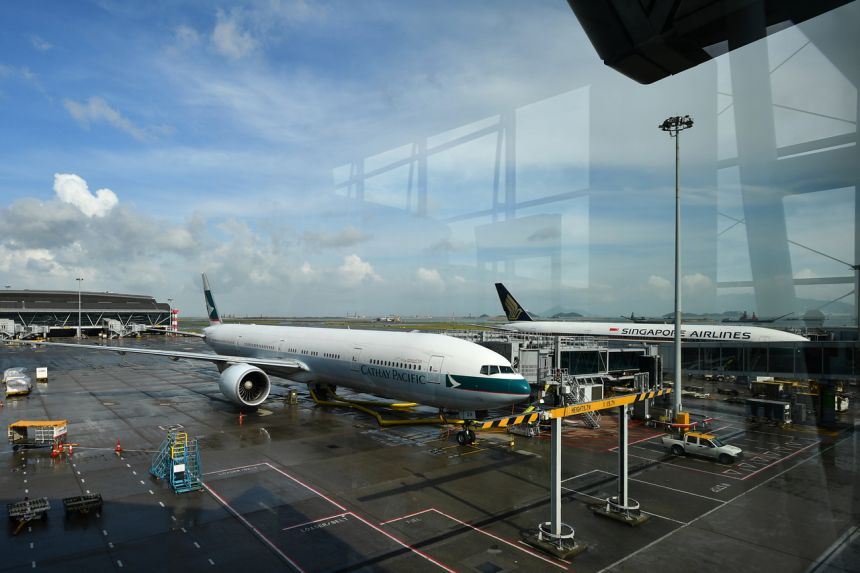 Tickets for Singapore Airlines and Cathay Pacific’s one-way direct flights from Singapore to Hong Kong have sold out from May 26 to June 4. Photo: The Straits Times

(The Straits Times) — Flights from Singapore to Hong Kong have sold out after the relaunch of an air travel bubble slated to start on May 26 was announced.

This travel arrangement will finally allow long-delayed quarantine-free travel to take off between both cities.

Singapore Airlines (SIA) and Cathay Pacific Airways will operate the travel bubble flights, which will start with one flight a day in each direction, each capped at 200 passengers. Flights will be increased to twice a day from June 10.

Cathay Pacific Airways said on Tuesday that its website saw more than a tenfold increase in traffic on Monday.

An SIA spokesman said the airline has also seen a strong demand for their air travel bubble flights, but declined to reveal figures due to commercial sensitivity.

Checks by The Straits Times on Tuesday at 8 p.m. found that tickets for one-way direct flights from Singapore to Hong Kong were sold out on the SIA website for May 26 to June 6. The next available tickets on June 7 were priced from S$586 ($442).

On the Cathay website, flights for the same route were sold out from May 26 to May 31. Flights for June 1 were listed from $896.

Demand was also strong for flights from Hong Kong to Singapore.

Tickets for one-way direct flights from Hong Kong to Singapore by SIA from May 26 to June 3 were also sold out, with the next available ticket on June 4 priced from around $995. Cathay tickets for the same route were available on June 5, from around $950.

Before the pandemic, economy flights to and from Singapore and Hong Kong cost about $450 to $550, depending on the air carrier and departure dates, said Alicia Seah, director of public relations and communications at travel agency Dynasty Travel. “The first wave of visitors to Hong Kong are travellers visiting loved ones, friends and relatives who they had not seen for more than a year,” she said.

“There are also enquiries from travellers who are already vaccinated and keen to travel to anywhere once the borders are open.”

Chan Brothers Travel also expects that initial take-up will be by those traveling for family visits, business or other essential reasons.

Nonetheless, local travel agents told ST that they are preparing travel packages for the eventual flux of leisure travellers.

The travel bubble between both cities was originally planned to start on Nov. 22 , but was deferred by both sides after a spike in Covid-19 cases in Hong Kong. Its resumption was announced on Monday by Singapore’s Ministry of Transport.

All travelers must also have Hong Kong's LeaveHomeSafe app installed on their mobile devices prior to leaving Singapore for Hong Kong.

June Ang, 31, who is based in Hong Kong, immediately booked a May 28 flight to see her family in Singapore and attend to business after the travel bubble relaunch was announced.

The co-founder of a financial firm said she has not seen her family since last February. She plans to stay in Singapore until early July.

“I used to fly back once a month until the pandemic struck. I missed my dad’s 60th birthday last year so I’m hoping to catch my mum’s 60th birthday in July. Despite having to pay higher fares and take Covid-19 tests as part of the travel bubble, I can ‘buy’ seven days of freedom from quarantine,” she said.

Others have booked tickets for a taste of leisure travel in more than a year.

Aaron Wong, 33, founder of a travel site, booked a five-day trip to Hong Kong to document his experience for his blog and to meet up with friends.

“There may be additional costs involved in travel but you do save when it comes to hotels where rates are at rock bottom now. Popular tourist sites will also be much less crowded than usual,” he said.

Hong Kong media reported on Monday that inquiries from travellers spiked after the announcement of the relaunched travel bubble, but there had not been many bookings yet.

The chief executive of travel agency WWPKG, Yuen Chun-ning, said a five-day tour to Singapore would cost over HK$10,000 ($1,288) in the first few days but will drop when more flights become available after June.

He added that the travel bubble might not boost the tourism industry of the special administrative region significantly, as it might not draw a big market.