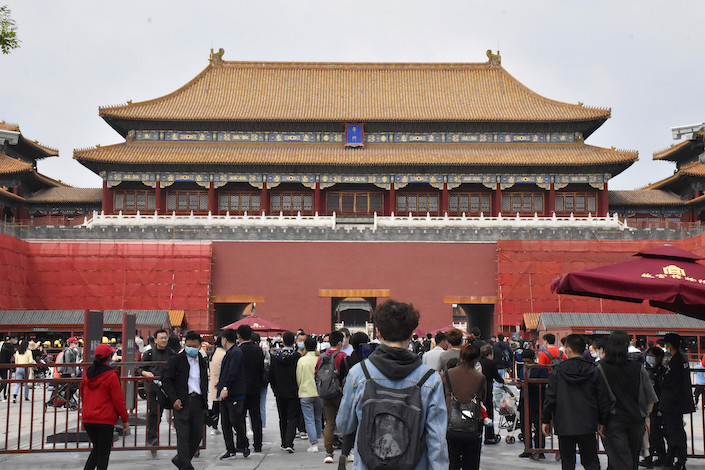 (Bloomberg) — Tickets for everything from domestic flights to theme parks are rapidly selling out in China ahead of its Labor Day holiday as the nation’s recovery from the Covid-19 pandemic gathers pace.

Bookings for seats on planes, hotel rooms and car rentals over the five-day break starting Saturday have all surged, surpassing those for the same period in 2019, according to Trip.com Group Co. People will make an estimated 200 million trips, a record for the national holiday, and tickets for Shanghai Disneyland have also sold out for most days.

China’s early success in tackling the pandemic has helped to underpin its economic rebound, and while the Asian nation has had the odd virus flare-up around other holidays this year, its ability to contain sporadic outbreaks has given millions of people the confidence to make domestic travel plans.

“This five-day holiday will fully release the suppressed demand for air travel,” said Shang Kejia, an official with the Civil Aviation Administration of China at a monthly briefing April 16. “The Labor Day Golden Week is a good time to travel all over the country.”

Congestion on the nation’s highways is expected to be 10% higher than for the Labor Day holiday period in 2020, according to estimates by map service company AutoNavi. Saturday is projected to be the busiest day, with a record traffic volume on China’s roads.

Bookings for seats on planes were up 23%, for hotels 43% and for car rentals 126% compared with same period in 2019, according to April 14 estimates from Trip.com. Online tickets for the Palace Museum in Beijing were all sold out, while those for Shanghai Disneyland were available for only one of the five days as of Thursday, according to its WeChat ticketing system.

The desire to travel over the holiday is forcing some to make alternative plans after missing out on tickets. Victor Li, a 32-year-old investment manager, decided to drive to Taiyuan from Beijing to visit his family after train seats sold out. The trip will take seven hours by car, compared with three by rail.

Railway ticketing service 12306 sold 3.15 million tickets for the first day of the holiday two weeks ahead of time, according to a CCTV report, with people posting screen shots on social media platform Sina Weibo of the app freezing due to high demand. The average price of plane tickets doubled compared with 2019 to 1,050 yuan ($162), according to a report by China Tourism Newspaper, run by Ministry of Culture and Tourism.

The pick-up in consumption is flowing through to China’s oil sector, which has remained a bright spot for the market as other regions grapple with a virus resurgence. The Labor Day holiday will return the country’s demand back to normal, said Yuntao Liu, an analyst with London-based Energy Aspects.

Strong gasoline consumption has helped underpin a boost in refining margins for the nation’s independent processors to 500 to 600 yuan per ton, the most since September, said Wang Luqing, an analyst with industry consultant SCI99. That’s prompted some to delay or cancel planned maintenance, Wang said.

Wholesale gasoline prices have climbed to the highest since September 2019, while diesel is near the strongest since February 2020, according to government data. Crude stockpiles are also draining at ports in Shandong province, where most Chinese private refiners operate, dropping to the lowest level in 11 weeks through April 23, figures from SCI99 show.