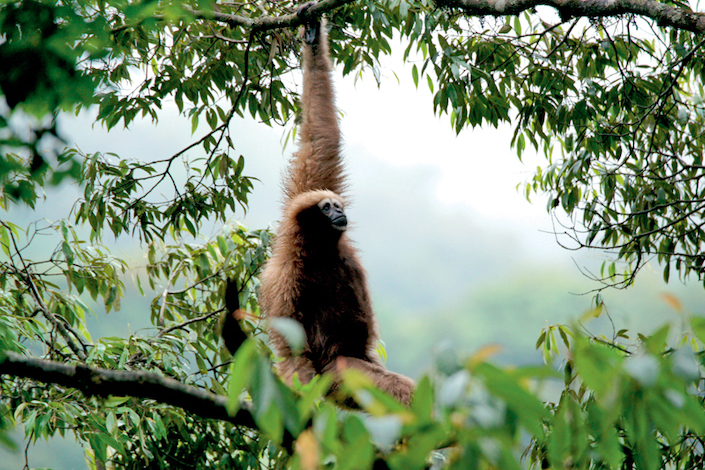 It was in 1997 when Li Jiahong, a 63-year-old wildlife protection expert, first heard the shrill calls of the Skywalker hoolock gibbon, one of the most endangered primates in the world.

After that, Li started a rugged journey of tracking the animals, which were long known to locals as “black gibbons.” The gibbons’ arboreal nature makes them hard to follow and study. They spend most of their lives high in the trees, using their strong and flexible shoulders to swing through the canopy one arm at a time. Scientists often try to find them by following their songs, which can be heard from more than a mile away.

After an eight-year search from the high peaks to the deep valleys of the Gaoligong Mountains, Li in 2005 successfully took the first clear photo of the elusive creature — a female gibbon with dark gray fur and thin white eyebrows. Li named the gibbon Azhen.

In 2017, the black gibbon was formally identified as a new species of primates and was named Hoolock tianxing in Chinese, which is derived from the ancient Chinese classic “Book of Changes” and refers to the gibbons’ arboreal locomotion. The name, which translates into English as “skywalker,” also pays respect to the central family of characters in the “Star Wars” movie series, according to Fan Pengfei, a primatologist who named the species.

In 2018, the Skywalker hoolock gibbon was listed among the world's 25 most endangered primates. According to Fan’s studies, there are fewer than 150 Skywalkers living in China, mainly in the tropical rainforests of Yunnan. The population is less than 10% of the number of wild giant pandas. There are also a small number of clusters in Myanmar, but their situations are largely unknown.

The Gaoligong Mountains, at the southeastern extent of the Himalayas, are home to the world’s highest-elevation and highest-latitude tropical rainforests. With diverse geographic conditions and climate, the region is known as China’s biodiversity hotspot.

The unique songs of Skywalkers traveling around the dense rainforest are familiar to many locals, but only a few have had the chance to meet the creatures.

During years of photographing Skywalkers, Li Jiahong closely followed Azhen’s family in the Nankang area, the southern part of the Gaoligong nature reserve. Azhen and her husband, Quiff, had a newborn baby when Li first found them.

The family had a neighbor — a single female Li named Partheno, or Lonely Girl. According to local villagers, Partheno lost her husband in the 1990s, probably because of poaching as many local people believed gibbon brain was a cure for epilepsy.

Since then, Partheno persistently tried to form a new family. She made numerous attempts to join Azhen’s family but was rejected. She cried every day in her unique, high-pitched voice in hopes of being heard by other gibbons, according to Li.

Skywalkers have strong sense of family territory. A typical Skywalker family consists of two to five members including the parents and their offspring. Most adult Skywalkers are hesitant to move beyond their settlements. They use their shrill songs to search for mates and communicate with fellows. But if their calls fail to get response, they may spend their lives alone.

They “are like lonely people who make cautious attempts to move forward a little bit to seek whether there are any friends,” said Fei Hanlan, a scholar at China West Normal University in Sichuan province. “If not, they will turn back to where they were.”

Like most Skywalker habitats in the Gaoligong Mountains, the Nankang area has become an island isolated from other Skywalker habitats by highways, villages and distance. Partheno and Azhen’s family were the only residents of the area.

The nearest habitat to where they live is more than 15 kilometers away, according to Fei. Studies found that Skywalkers usually migrate only within a 10-kilometer radius, meaning Partheno was very unlikely to meet other gibbons.

In 1917, American adventurer and naturalist Roy Andrews first found a Skywalker gibbon specimen in a forest in Gaoligong about 700 meters above sea level. The area has since been developed into farmland and villages.

The Gaoligong Mountains National Nature Reserve, founded in 1986, is one of the oldest nature reserves in China. But most of the reserved zones are set in high- elevation areas, leaving the lower areas for farming. Over the past century, the expansion of human activities and agricultural production has forced Skywalkers to move higher, from 700 meters of elevation to more than 1,700 meters, Fei said.

A 2011 study by a team led by Fan Pengfei found that the number of Skywalkers in five areas in Gaoligong, including Nankang, declined 50% in 20 years. The animals completely disappeared in nine other areas. Agricultural development, logging and poaching are the main factors, according to the study.

Since the 1980s, local authorities have encouraged farmers to grow tsaoko, a densely growing plant whose dried fruit is also known as black cardamom, in an effort to bolster farmers’ incomes and alleviate poverty. Tsaoko plants mainly grow under the forest canopy, which is believed to have a limited impact on the forest. But scientists said growing tsaoko led to the removal of taller trees to increase sunlight penetration to the forest floor, making it more difficult for gibbons to travel and find food.

Researchers have found 51 Skywalkers living in 20 groups within the Gaoligong nature reserve, most of them in isolation, according to Zhang Fuyou, the deputy director of Baoshan Preservation Bureau in Gaoligong who has tracked the Skywalker gibbons since 2017.

By the end of 2021, most of the contracts signed between the local government and farmers for tsaoko planting in the reserve will expire, Zhang said. “It will require a hefty investment” to restore the forest, he said.

Outside the Gaoligong reserve, other habitats for Skywalker gibbons face similar problems. In Yingjiang county, bordering Myanmar, about 80 gibbons were found in 2017, living in 22 groups. But the gibbon groups are dispersed and separated from each other while being threatened by human activities, said Zhang Lixiang, a local preservation official.

Skywalker gibbons are born with white fur and gradually turned grey or black depending on their sex. They could live as long as 30 years, reaching sexual maturity at 8 to 10 years old. Females give birth around every four years, producing only one infant.

In late 2007, Li Jiahong found that the Azhen couple lost their first child, probably due to attacks by other animals. In 2012, Azhen had a second child, a baby girl named Hope by researchers. But in July 2018, Hope was found dead. An autopsy showed that Hope died because of multiple organ failures, indicating potential genetic disease.

Scientists collected stool for genetic studies and found that the three adult gibbons in Nankang — Azhen, Quiff and Partheno — were close relatives, probably having the same grandmother. Inbreeding has made the gibbons more likely to suffer genetic diseases, scientists said.

Inbreeding many years ago started reducing genetic diversity of gibbon groups in several habitats in Gaoligong, Fan said, based on his studies.

Isolated habitats, shrinking populations and inbreeding are pushing Skywalker gibbons to the verge of an extinction vortex, a scenario in which environmental, genetic and demographic forces interact over time to push a population toward extinction.

According to Fei, there are at least 10 single adult Skywalker gibbons that are unable to find mate, like Partheno. And at least three families are living in isolation like the Azhen couple.

“Extinction is very likely,” Fei said. Without intervention, gibbon families currently living in isolation will disappear in about 30 years, while others won’t last any longer, Fei said.

Scientists are studying various methods to help Skywalkers to interbreed and share genes. One proposal is to anesthetize and capture gibbons to move them to other habitats. But experts are highly cautious about such measures because of risks associated with anesthesia and transport that may harm the gibbons in the process.

Another plan under study is to build corridors and pathways to help them migrate and find new partners. But that plan also faces challenges in implementation because of complicated geographic conditions in Yunnan.

In 2018, scientists started testing an innovative program using satellite telephones to broadcast Skywalker songs across regions to help them communicate and encourage them to find each other.

Early experiments with Partheno sparked hopes as she responded excitedly to songs from another gibbon through the phone broadcasts.

Encouraged by the results, scientists set up a call between Partheno and a male gibbon living 20 kilometers away named A1. The pair excitedly chatted through the connection and started to look for each other. Following Partheno’s songs and voice recordings, A1 started moving beyond his habitat.

The best scenario was that with sound guidance, Partheno and A1 could move toward each other and eventually meet in a new habitat, Fei said.

“The sounds would let them know there is hope and encourage them to keep moving,” he said.

But the reality is more challenging. Due to gibbons’ caution and the long distance, it might have taken at least three years or more for Partheno and A1 to find each other even if their journeys went smoothly, according to Fei’s estimate.

After the rainy season in 2020, however, researchers lost track of Partheno. No one heard her songs again. Partheno was around 30 years old and probably died because of her age, Li said.

“She waited and cried throughout her life, without any hope,” Li said.

Azhen and her husband are also getting old. They have a new baby known as Rice. After several years, Rice will become an orphan and the last Skywalker in Nankang, Li said.

Scientists are desperately searching for solutions to help the Skywalkers breed.

“We can wait, but those groups with tiny populations can’t,” one expert said.

There is still hope. After “chatting” with Partheno, A1 started his journey and left the habitat where he stayed for four years, researchers found. Although no gibbon has been detected in areas near him, A1’s search continues.