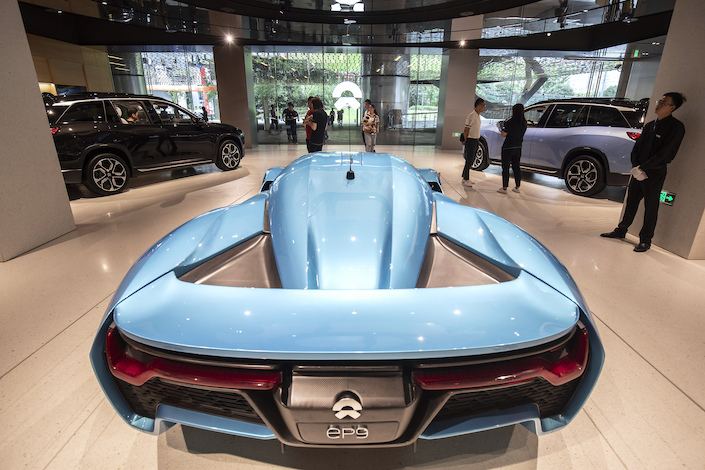 A Nio Inc. EP9 sports car stands on display inside the Nio House showroom at the Shanghai Tower in Shanghai

Nio will start delivering the latest version of its ES8 electric six- or seven-seat sport utility vehicle to the Nordic nation in September, Chief Executive Officer William Li said Thursday at an event in Shanghai. Its first electric sedan, the ET7, will launch in the second half of 2022. Preorders for the ES8 are expected to start shortly.

“Launching in the European market will definitively help us grow,” Li said. It will set a “higher bar as we’re entering developed countries with more aggressive competition.”

Choosing Norway as its European beachhead presents opportunities and challenges for Shanghai-based, U.S.-listed Nio. Norway last year became the first nation in the world where electric cars seized a majority of annual vehicle sales, thanks to green-friendly government incentives and extensive charging infrastructure. The country wants all cars sold there to be zero-emissions in 2025. However, little known outside China, Nio will be going up against more-established EVs like Audi’s e-Tron SUV, Tesla Inc.’s Model 3 sedan and Nissan Motor Co.’s Leaf hatchback.

Even traditional Chinese automakers, from Great Wall Motor Co. to Geely Automobile Holdings Ltd., have struggled to crack overseas markets, held back by a lack of name recognition, questions over quality and reliability, and a dearth of dealer and service networks. Great Wall and Geely each got less than 10% of revenue outside the home market last year, according to data compiled by Bloomberg.

It’s also a risky move for a company that less than two years ago was on the brink of collapse before getting a funding lifeline from the Hefei municipal government. While Nio last week reported a narrower first-quarter loss, it faces stiff competition in China from rival startups Xpeng Inc. and Li Auto Inc. and new challenges from tech giants like Baidu Inc. and Xiaomi Corp., which are pouring billions of dollars into EVs. Global automakers from BMW AG to Volkswagen AG are also rolling out new electric models.

Nio is planning to bring its upmarket Nio Houses — a combination showroom, meeting space and cafe for car enthusiasts — to Europe. Spending on the splashy club-like Nio Houses contributed to the cash burn that almost sank the company, and had to be wound back as the company conserved cash.

The company leased a 2,150-square-meter space in central Oslo for its first showroom and will have four smaller spaces in Bergen, Stavanger, Trondheim and Kristiansand.

Nio is planning on going with a direct sales model in Norway, supported by service centers and mobile-service cars. Other Chinese carmakers have opted to partner with local dealers. Aichi Automobile delivered more than 1,000 vehicles in Europe since making its first exports in May 2020, while Xpeng delivered 100 of its G3 SUVs to Norway in December and has made a second shipment, a spokeswoman said, without giving details.

Nio will also build four battery-swap stations in Norway this year with 12 more planned in 2022 across five cities. By constructing battery-swap stations, Nio is setting up the infrastructure for not only charging options but also its battery-as-a-service concept, whereby customers can buy a car and lease the battery. That makes for much lower upfront payments. Initially, battery-swap stations will be made in China and shipped to Europe, although over time, Nio may consider local production.

Some analysts expect Europe to overtake China as the world’s biggest EV market this year. The region may account for 44% of global passenger EV sales in 2021, compared with 39% for China, according to BloombergNEF.

Li said Nio one day plans to enter the U.S. market but hasn’t any specific time frame. “Under the current international relations situation, it’s tougher for Chinese-background companies to enter overseas markets compared with years ago,” he said.

In China, Nio delivered a total of 102,803 vehicles as of April 30. Like the rest of the auto industry, the company has been hit by the global chip shortage, suspending production for five days from late March to early April. It forecast deliveries of 21,000 to 22,000 cars this quarter amid “significant challenges” in the supply chain, Li said last week.