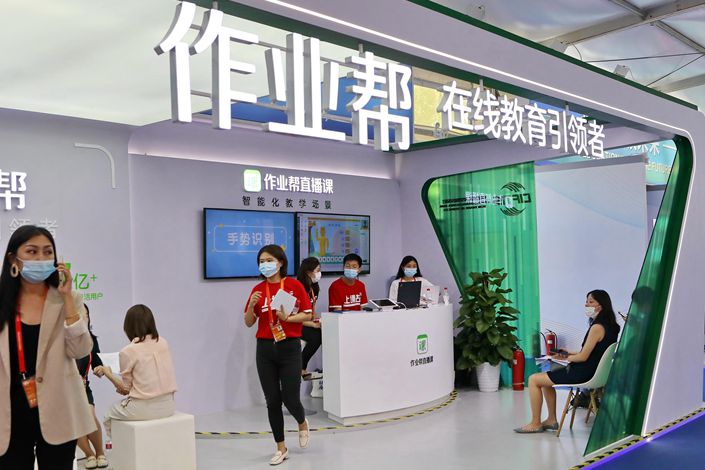 The Beijing Municipal Bureau of Market Supervision imposed a fine of 2.5 million yuan each on two off-campus education and training institutions, Zuoyebang and yuanfudao, on May 10. Photo: VCG

Two hot Chinese tutoring properties were fined millions of yuan for false marketing claims — including in one case professing a partnership with the United Nations — as authorities tighten the screws on the country’s after-school training scene.

Aside from claiming to have “cooperated with the United Nations,” the regulator found Zuoyebang — registered as Xiaochuan Chuhai Education Technology (Beijing) Co. Ltd. — misled consumers about tutor qualifications and faked user reviews.

Beijing Yuanli Education Technology Co. Ltd., which trades as Yuanfudao, ran ads that made false claims about one-on-one instruction, and falsely told anxious parents four of their friends had already signed up for the service, the SAMR found.

The regulator also took aim at the use of fake discounts, with both firms found to have claimed they were slashing prices on classes worth thousands of yuan without ever having sold the classes at those prices.

Competition has become heated as investor interest has grown in the industry, which has flourished since coronavirus-induced lockdowns increased the popularity of e-learning platforms. In 2020, China’s online education industry saw financing activities that raised over 50 billion yuan, more than the combined amount raised in the past 10 years, according to a report by the Chinese Academy of Sciences.

Beijing-based Zuoyebang completed a funding round of more than $1.6 billion in December. Alibaba, Tiger Global Management, SoftBank’s Vision Fund 1, Sequoia Capital China and FountainVest Partners were among those who stumped up cash.

In October, Yuanfudao said it raised $2.2 billion in two funding rounds that gave the K-12 tutoring company a valuation of $15.5 billion. The first round of investment was led by social media giant Tencent with participation from Hillhouse Capital, Boyu Capital and IDG Capital. The second round was led by DST Global, according to Yuanfudao.

But as antitrust regulators close the net on China’s tech firms, Tencent’s 2018 investment in Yuanfudao cost the firm 500,000 yuan for not seeking regulatory approval — a violation of country’s anti-monopoly laws, according to a March statement (link in Chinese). The regulator said the deal itself wasn’t anti-competitive.