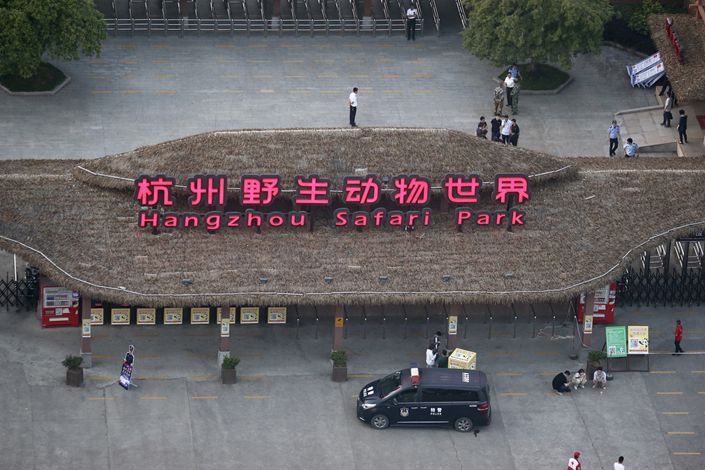 Police in the eastern Chinese city of Hangzhou has launched an investigation into the escape of three juvenile leopards from a safari park, according to local authorities.

Five people have been detained over the incident, including the Hangzhou Safari Park’s General Manager Zhang Dequan, the Fuyang district government said Monday in a statement (link in Chinese).

So far, two of the big cats have been recaptured while one, still on the loose, was spotted early Sunday morning in a forest near Hejia village in Xihu district, home to the iconic West Lake.

The artificially bred leopards, one male and two females, escaped on April 19 while two zookeepers were cleaning their enclosure, said Wang Hong, vice mayor of Hangzhou, at a press conference Monday afternoon.

The zookeepers “did not follow norms” during the cleaning, he said, adding that the leopards were around 2 ½ years old.

Subsequently, the general manager Zhang told every staff member at the park not to report the case to avoid a potential decrease in the number of visitors during the five-day Labor Day Holiday, normally one of the country’s peak tourist seasons, according to local police investigation.

On April 21, one of the escaped leopards was anesthetized after being captured by park staff. But until May 2, a villager in Xihu again spotted and photographed a leopard.

On Friday, residents living near the park saw a leopard and contacted police, according to a statement (link in Chinese).

A day later, the leopard was caught and captured. Both of the captured animals are in “good health,” Wang said.

In a Saturday statement (link in Chinese), the Hangzhou Safari Park, one of the largest zoos in eastern China, said that they hadn’t notified the public about the escaped animals earlier because juvenile leopards “are less aggressive,” and because they were afraid of causing a panic.

More than 4,000 people including the police, firefighters, officials and concerned citizens joined the search, Wang said.