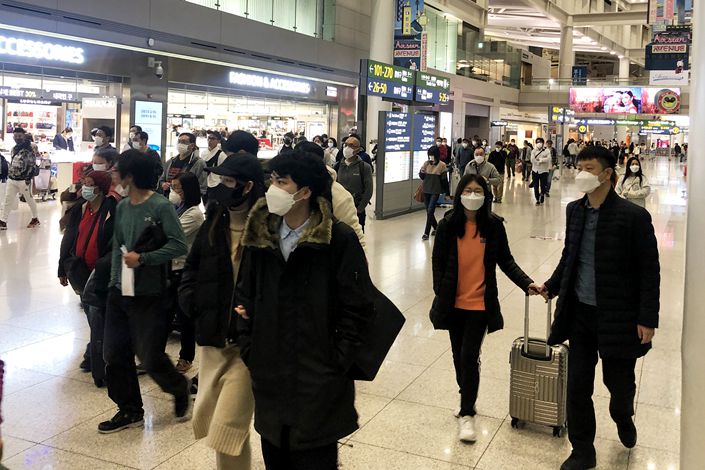 (Bloomberg) — Last month, Hyun Jung-a boarded a flight from South Korea’s Incheon Airport. Around two hours later, she was back in the same airport and loading up on duty-free shopping, despite never landing in another country.

The Air Busan Co. flight, organized by Lotte Duty Free for its VIP customers, was Hyun’s first since the pandemic began and it didn’t cost her a cent. Because the route briefly departed Korean airspace and went over a Japanese island, the 130 passengers on board qualified to shop at duty-free stores in Seoul typically reserved for people who have traveled internationally.

Destination-less flights like these are an attempt by duty-free operators to salvage an industry decimated by Covid-19. Before the virus, business was booming — the global duty-free market was worth $85 billion in 2019 and on track to reach $139 billion by 2027, according to Verified Market Research.

While shoppers on flights such as Hyun’s won’t fill the financial void, they at least bring in some much-needed business.

“I saw a lot of people with bags full of duty-free items,” said Hyun, who bought a Chanel bag, shoes and cosmetics. “I tell all my friends that it’s worth taking the flight because of the duty-free shopping opportunity.”

Hotel Shilla, South Korea’s second-biggest duty-free operator after Lotte, is offering 114 seats on two so-called flights to nowhere on May 23 and 30 to customers who have spent more than $550 at its stores since May 3. Lotte is putting on another five flights this month.

The industry is in less of a squeeze where domestic air traffic has rebounded and tax-free shopping zones are in place. The palm-fringed Chinese island of Hainan has become an even more popular getaway for tourists from the mainland now starved of international travel. That’s helped the province’s duty-free sales, which more than doubled to 27.5 billion yuan ($4.3 billion) last year, according to the Ministry of Commerce.

Duty-free shopping has been permitted for domestic tourists in Hainan since 2011. In July, the government raised the spending limit to allow people to buy more and it is extending some duty-free shopping to Beijing, Shanghai and other cities to tap the growing purchasing power trapped in China.

Catering to the demand in Hainan, Alibaba Group Holding Ltd.’s logistics unit is starting daily cargo flights from Singapore to deliver cosmetics, handbags and other goods to the island. Japan’s leading duty-free retailer, Laox Co., which was acquired by Chinese retailer Suning Holdings Group Co. Ltd. in 2009, is planning to enter Hainan as soon as the second half of this year, setting up stores designed similarly to its outlets in Japan.

“The trend of visiting Hainan to do luxury shopping is here to stay for the Chinese,” said Jonathan Siboni, chief executive officer of data-intelligence firm Luxurynsight.

International air travel, if it is happening at all, is tending toward shorter-haul, regional routes, and from places where vaccination programs are at a more advanced stage. Seven of the world’s busiest international routes in the first four months of the year included U.S. links, such as Cancun-Houston and New York-Santo Domingo, according to aviation analytics company Cirium.

Share prices suggest investors are upbeat. Dufry’s stock has climbed about 120% since the end of September, while Hotel Shilla is near the highest in nearly 15 months in Seoul.

Paris-based Lagardere Travel Retail, which operates duty-free stores, restaurants and other shops in airports, is counting on customers from closer to home to help it through an uncertain summer in Europe after its revenue slid 56% from a year earlier to 341 million euros ($414 million) in the first three months.

“We’re betting more on retired Europeans traveling,” said Frederic Chevalier, the company’s chief operating officer for Europe, Middle East and Africa. McKinsey forecasts passenger flows between Asia and Europe will only return to 2019 levels “beyond 2024,” said Anita Balchandani, a partner at the firm.

With vaccination rates lagging in places such as South Korea — which has delivered enough jabs for just 4% of the population, Bloomberg’s Virus Tracker shows — retailers may rely on gimmicks like flights to nowhere for a while.

“The contribution from the flights to nowhere is small but it’s better than having nothing,” said Sung Junewon, an analyst at Shinhan Investment Corp. in Seoul. “Every little bit counts.”

Seven South Korean carriers have operated these flights, carrying about 8,000 passengers in total. Authorities are also considering plans to allow overseas flights into Incheon, where passengers can spend a few hours shopping without leaving the airport before flying back to their original departure point.

Park Ju-hyun, a 31-year-old office worker from Seoul, paid about 90,000 won ($80) for a flight-to-nowhere ticket in March. It was her first time on a plane since a trip to the Philippines before the pandemic, and it was well worth it for the shopping, said Park, who spent about $600, mostly on cosmetics.

“It was nice to be back at the airport,” she said.