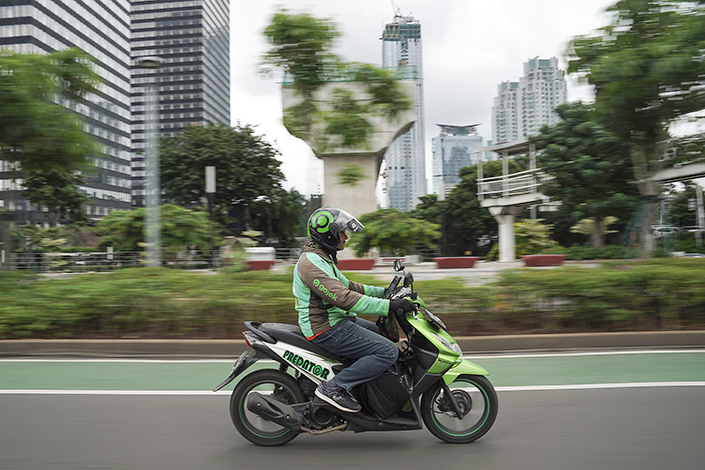 A Gojek rider on the street in Jakarta, Indonesia. Photo: VCG

Indonesia’s Tokopedia and Gojek, whose backers include Chinese e-commerce giants Alibaba and JD.com, said Monday they will merge, creating one of Southeast Asia’s top internet firms providing everything from digital payments to e-commerce and ride hailing services.

The merged company, GoTo Group, will become Indonesia's largest e-commerce and online car-hailing platform, with a market value of $18 billion, based on the two companies’ latest valuations.

Gojek, whose investors include JD.com Inc. and was valued at $10.5 billion in January, offers a wide range of services from ride-hailing to food delivery, digital payments, banking and entertainment. Alibaba Group Holding Ltd.-backed Tokopedia, which was valued at about $7.5 billion, is Indonesia’s largest online e-commerce site. Both firms count Softbank Group Corp., Google LLC, Temasek Holdings Pte. Ltd. and Sequoia Capital among their backers.

The two firms combined account for more than 2% of Indonesia's GDP, according to their joint statement.

The merger will set the scene for a showdown with Singapore-based Grab, which counts Indonesia as its largest market.

Grab, which is currently Southeast Asia’s largest tech unicorn, announced on April 13 that it would make a U.S. backdoor listing through a merger with Altimeter Capital, a type of company known as a special purpose acquisition company or SPAC. The deal would create a company valued at up to $40 billion.

The merged company will also compete with Alibaba-owned Lazada, which is also an e-commerce company focused on Southeast Asia.

Tokopedia was previously in talks to merge with Grab, but these failed in part due to anti-monopoly concerns owing to the companies’ dominant market positions. Under those previous plans, Tokopedia was to seek a listing in the U.S. or Southeast Asia after the merger.