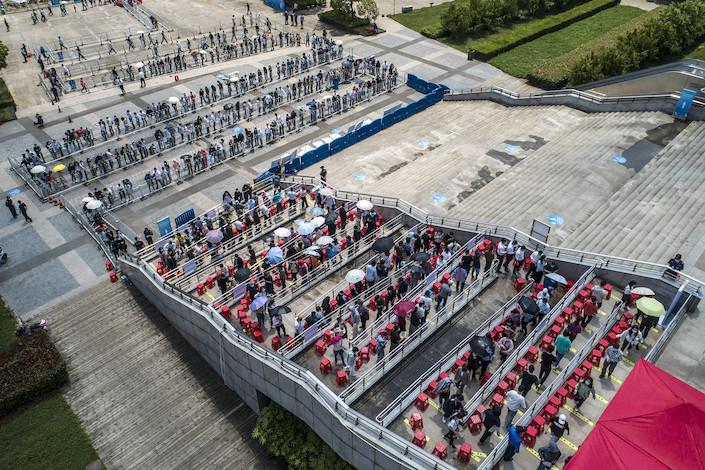 efei, Anhui’s capital, administered 360,000 doses Friday, the most in a single day for the hub of 10 million people

(Bloomberg) — China is vaccinating almost 14 million people a day, the fastest pace in the world, as the country races to protect its Covid-19 advantage while major Western nations reopen their economies.

The ramp-up in shots is being helped by a flare-up of cases in the eastern province of Anhui and the northeastern region of Liaoning. Videos on social media showed people rushing to get vaccinations, with long queues at inoculation sites despite heavy rain. Hefei, Anhui’s capital, administered 360,000 doses Friday, the most in a single day for the hub of 10 million people, the official Xinhua News Agency reported.

Many nations in Asia, China included, are struggling to combat vaccine hesitation. Some were lulled into a sense of complacency by the region’s early success in containing the virus while others simply don’t trust the safety or efficacy of the vaccines available. However, recent outbreaks in places like Singapore and Taiwan are testing that reluctance amid harsher lockdown measures, bringing into clearer focus the understanding that being vaccinated can help stop serious illness.

Beijing is loathe to lose the advantage it’s built up over the U.S and other major Western economies with its successful containment of the pathogen and has added pressure through such steps as calling for mandatory vaccination among state-owned enterprise employees and Communist Party members.

Figures from the National Health Commission show 13.7 million vaccines were administered Friday. The escalation of shots in China means the country is now closer to its target of vaccinating 40% of the population, or at least delivering 560 million doses, by the end of June. As of Sunday, 393 million doses had been given, with 210 million of those taking place over the past month, official data show. According to the World Health Organization, China can now administer 20 million doses a day.

“Don’t hesitate, get vaccinated,” Xinhua News Agency says on its official WeChat account. “The fact that newly infected people are not vaccinated is undoubtedly a wake-up call to all — to build an immunization barrier, vaccination is not an option but a must.”

It’s estimated China will have 900 million to 1 billion of its 1.4 billion people vaccinated by next year, the head of the Chinese Center for Disease Control and Prevention, George Fu Gao, said in a recent interview.

China has enforced some of the harshest approaches in the world in terms of putting whole regions into lockdown and people into quarantine, even when cases only in the single digits are detected. Because of the latest outbreak, schools have been halted in the northern coastal city Yingkou in Liaoning while people are banned from leaving their residential compounds in certain regions of Anhui.