By Wang Xintong and Han Wei 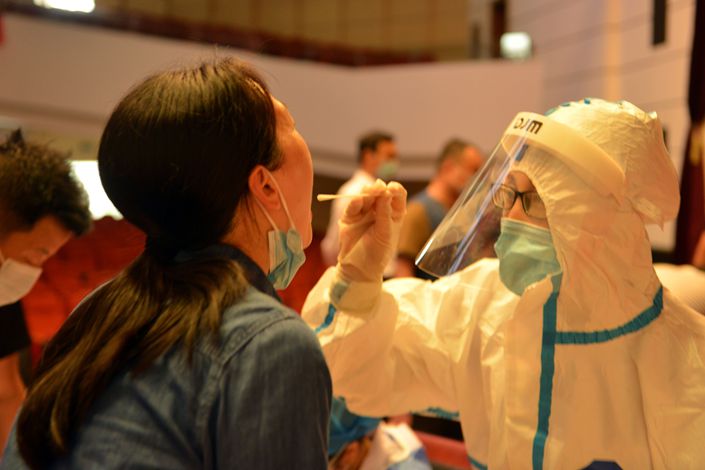 Liaoning province reported two local cases Friday following at least four cases recorded in Anhui over the past two days. A handful of asymptomatic cases was also found in the two regions. The source of the new outbreaks has yet to be confirmed.

The new flare-ups were the first local transmissions in China since April 20, when the country recorded two such infections in the southwestern province of Yunnan, where a city on the border with Myanmar reported a new cluster in late March.

As of 7 p.m. Friday, Liaoning’s two locally transmitted cases and three asymptomatic infections were all found in the city of Yingkou, the provincial health authority said (link in Chinese). The province also found one imported case among inbound travelers during the day. Authorities didn't disclose details of the new patients.

Liaoning, home to nearly 43 million people, has reported a total of 411 Covid-19 cases since the outbreak started, official data showed.

Among the four new infections reported in Anhui since Thursday, two of the patients traveled to Yingkou, according to Anhui officials.

The Bayuquan district in Yingkou, where the two Anhui patients visited, imposed travel restrictions Friday afternoon, while Lu’an city in Anhui where the first case was detected started mass virus testing of 600,000 residents.

Wu Guangjin, director of Lu’an’s health commission, said the virus is likely to have been imported from other provinces as the city hasn’t recorded any infections since mid-February 2020.

The National Health Commission sent a team of experts to Anhui to study the outbreak.

The patient Li, 27, was previously in close contact with a recent arrival from overseas in Dalian, a port city in Liaoning, according to the Anhui Health Commission (link in Chinese). She traveled from Dalian to Hefei, Anhui’s capital, May 1.

Patient Zhang, 29, lives in the Anhui city of Lu’an and had not left the province recently. She was in close contact with Li during a training class Li led at the photography studio at which Zhang works, the Anhui health authorities said (link in Chinese). Another patient also attended the training.

Lü, 31, is Li’s colleague, the Hefei health commission said. On Monday, Lü traveled from Beijing to Hefei, where she stayed with Li, local authorities said.