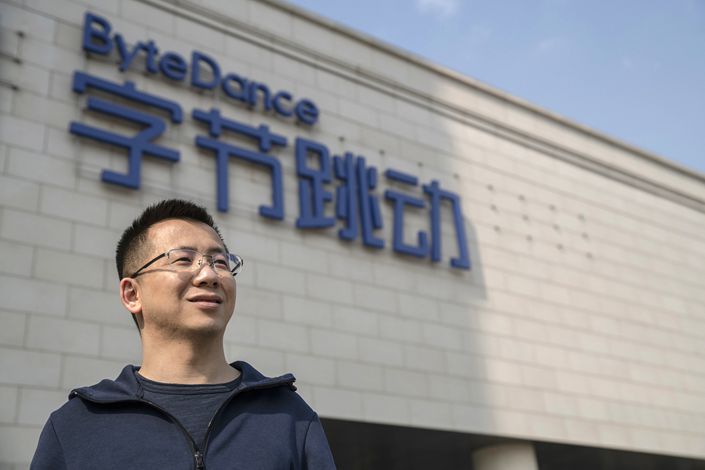 On Thursday, news that ByteDance founder, chairman and CEO Zhang Yiming was relinquishing his executive role leaked in the form of an internal memo, which ByteDance later published on its blog.

Zhang announced he would be stepping back to take an as yet unspecified strategic role at the company that created global sensation TikTok. His human resources chief Liang Rubo, who co-founded the firm in 2012, will take over as CEO. Zhang did not address his role as chairman.

Recently, several colleagues have asked me why I haven't updated my OKRs. Frankly, I feel I did not achieve as much as I had hoped to on my previous objectives in the areas of new strategic opportunities, organizational management, and social responsibility. Since the beginning of this year, I've spent a lot of time thinking about how to better drive real long-term breakthroughs, which cannot simply rely on steady, but incremental, progress.

After several months of thinking about this, I came to the conclusion that transitioning out of the role of CEO, with all of the related day-to-day responsibilities, would enable me to have greater impact on longer-term initiatives. Let me explain how I came to this conclusion.

Our success over the last nine years has been predicated upon our ability to innovate at just the right moment in the development of the industry. Notably, this has included applying machine learning to mobile and video products.

Between graduating from college and starting ByteDance, I spent a lot of time thinking and learning about challenges like effectively disseminating information, using technology to improve products, and approaching the development of a company, much like one would a product: through constant re-evaluation, adjustment, and iteration. That period of profound thinking and ideation helped lay the groundwork for ByteDance. With our business growing well, it is time to think about how we can, not simply scale, but make innovative, meaningful, long-term progress towards our mission to “Inspire Creativity, Enrich life.”

Innovation and success are rooted in years of exploring and imagining what is possible. However, few people have real insight into the future, preferring to model on current and past achievements. People are amazed by the success of electric cars, but they forget that Tesla is 18 years old and first experimented with laptop batteries to power its vehicles. People know about Apple's software management tool HomeBrew, but few realize that computer geeks were discussing the Apple I in the HomeBrew Club in the 1970s. Virtual reality, life science, and scientific computation are playing a bigger role in people's lives as technology brings ever-greater impact to society. This type of progress requires us to break through the inertia, and to keep exploring.

At our seventh anniversary, I shared a line from “Alice in Wonderland”: "Why, sometimes I've believed as many as six impossible things before breakfast." I like to think about possibilities that are still just that: possibilities. For a long time, I've put my online status as "Daydreaming." What I mean isn't that I'm zoning out, but rather that I'm thinking about possibilities that people might think are just fantasy. In the past three years, many things that seemed like fantasies have, in fact, become reality.

Yet I worry that I am still relying too much on the ideas I had before starting the company, and haven't challenged myself by updating those concepts. As an example, before 2017, I spent a lot of time keeping track of developments in machine learning. However, since then, while I do my best to bookmark technical articles online, I haven't had the time to make much progress digging into the area. During technology meetings, this sometimes means I actually struggle to keep up with the discussion.

Three years ago, I spoke with some entrepreneurs about the challenges of scaling a business. I said that often when companies mature and expand, many fall into the trap of the CEO becoming overly central — listening to presentations, handling approvals, and making decisions reactively. This leads to an over-reliance on existing ideas already in the company, and results in knowledge structures being slow to iterate.

In order to avoid this trap, I gradually came to a decision over the last six months to take on a new role at ByteDance. I believe I can best challenge the limits of what the company can achieve over the next decade, and drive innovation, by drawing on my strengths of highly-focused learning, systematic thought, and a willingness to attempt new things.

I also believe that giving back to society is an important piece of this, and we have already made some headway, exploring new initiatives in education, brain disease research and digitizing ancient books. Having been involved in some of these myself, I hope to do more by contributing my own ideas and helping deliver new solutions.

At the same time, there are still many things that we need to improve, and I think someone else can better drive progress through areas like improved daily management. The truth is, I lack some of the skills that make an ideal manager. I'm more interested in analyzing organizational and market principles, and leveraging these theories to further reduce management work, rather than actually managing people. Similarly, I'm not very social, preferring solitary activities like being online, reading, listening to music, and daydreaming about what may be possible.

In March, I began discussing with a small group the possibility of having Rubo, the co-founder of ByteDance, taking over as CEO, and leveraging his strengths in management, organization, and social engagement. The team was understanding and supported the idea. Rubo previously helped me found another company, so we have worked together closely for many years. As many of you know, Rubo has taken on numerous critical roles at ByteDance at different times, including head of R&D, Lark and Efficiency Engineering, and most recently, Human Resources and Management, as we've scaled up at an incredible rate globally.

Since day 1, Rubo has been an invaluable partner — completing my coding for new systems, buying and installing servers, and developing key recruitment and corporate policies and management systems, among a list of contributions too long to enumerate. Over the next six months we will work side by side to ensure the smoothest possible transition, and I know you will all also support him.

A few years ago, I posted on social media: "The meaning of travel lies in switching time and space, which helps you observe others' lives in a new environment as a stranger, and reflect on yourself and your life with a detached eye." After handing over my role as CEO, and removing myself from the responsibilities of daily management, I will have the space to explore long-term strategies, organizational culture and social responsibility, with a more objective perspective on the company.

In our 2012 business plan, I told the team that the most rewarding thing about building a company is being able to enjoy the journey together. I look forward to this new phase and continuing our voyage together!

Related: Zhang Yiming, Founder of TikTok Parent ByteDance, to Step Down as CEO