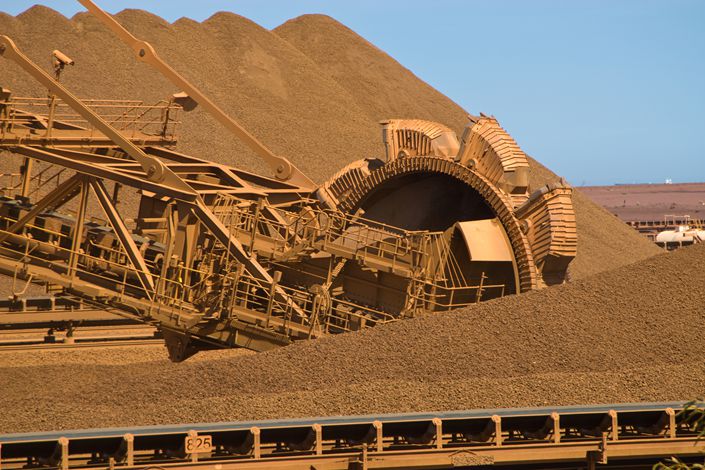 (Bloomberg) — BHP Group’s start up of production at its $3.6 billion South Flank project in Australia — combined with existing operations at the site — will create the world’s biggest iron ore hub. It may also help temporarily cool a hot market.

Iron ore futures are trading below $200 a ton after China’s cabinet called for tougher oversight of commodity markets and protection for consumers from soaring prices. While South Flank was a replacement mine, the announcement of a big mine coming on stream can add short-term to negative market talk, according to Peter O’Connor, mining analyst at Shaw & Partners Ltd.

Commodities have tumbled as international markets are gripped by inflation fears and the authorities in Beijing continue to try to jawbone and manage prices lower. China’s cabinet expressed concerns Wednesday about the surge in prices for a second week in row, calling for more effort to curb “unreasonable” gains and prevent any impact on consumer prices. The meeting, chaired by Premier Li Keqiang, also called for a crackdown on speculation and hoarding.

Against this backdrop, where steel margins were getting compressed in China and Li was trying to talk commodities down, “it weighs on that narrative as opposed to really weighing on the market,” O’Connor said. “But when you get these sort of extremes — that subjective narrative can be a key driver.”

South Flank has been built to replace the depleting Yandi mine — and together with the existing Mining Area C — will form a hub with annual production of 145 million tons a year. South Flank’s higher quality product will also lift the average iron ore grade across BHP’s Pilbara operations. In the short-term, there was potential for a squeeze higher in BHP’s ore exports as South Flank and Yandi operated in tandem, although the overall physical impact on the market was likely to be small, said O’Connor.

The start of production of 80 million tons a year at South Flank, matching Yandi, comes at a time when top exporters Australia and Brazil have been challenged in meeting strong demand from Chinese steel mills. Pilbara shipments were down 6% in April compared to the year-ago period, while Brazil’s exports were flat, according to Bloomberg Intelligence. BHP’s current guidance is for annual production at the upper end of its range of 276 million to 286 million tons.