Blog: How I Survived the Deadly Ultramarathon in Gansu 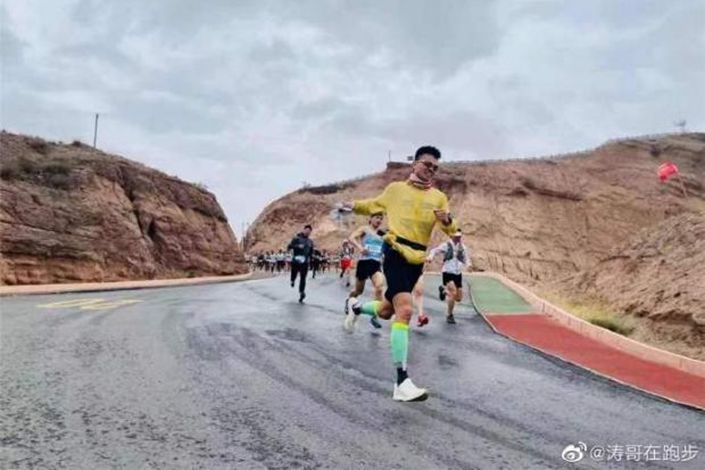 Editor’s note: This piece was written on May 23, the day after the disastrous ultramarathon in Northwest China that lead to the deaths of 21 runners. The author was participant in the race.

My name is Zhang Xiaotao, and I participated in the mountain marathon in Baiyin, Gansu province.

I and the other runners arrived at the site yesterday at 7:30 a.m. for some preparations. At that time, the wind was blowing and the temperature was quite low. Since the race was held in a scenic area, we were able to warm ourselves and take rest in a small shop beside the scenic area. We began the race at 9:00 a.m. The wind was still strong, and many runners lost their hats to its powerful gusts. But for the first 20 kilometers of the course, conditions were still normal.

Things started to go wrong after the second checkpoint. I was toward the very front of the pack. When I arrived at the second checkpoint, it was starting to rain. I continued running along the Yellow River for some distance and then started uphill. The stretch of course between checkpoints two and three is basically all an ascent. This is where the tragedy was to unfold.

When I reached the foot of the mountain, it was already windy and rainy, but the conditions intensified as I continued uphill. I was halfway up the mountain when hail started to fall. My face was pummeled by ice and my vision blurred, making it difficult to see the path clearly.

At that point, I overtook a runner named Huang Guanjun. I greeted him, but he responded simply by pointing to his ears and waving, meaning that he couldn’t hear me. Later I learned that Huang was deaf, and he was already in bad shape when I encountered him (editor’s note: Huang, a National Paralympic Games champion, was one of the victims of this ultramarathon). There was another runner I’d been keeping pace with since the starting line, Wu Panrong from Guizhou province. When we were halfway up the mountain, Wu began to shake all over and his voice trembled when he spoke. Noticing what a state he was in, I put my arm around him and we continued together. After that, I don’t remember things very clearly. The wind was so strong and the road was so slippery that we couldn’t continue holding onto each other or we would have both fallen down. Gradually we became separated. I thought things would be okay if I could just reach the other side of the mountain, so I ran as quickly as possible. At the time, I should have been in fourth place, followed by Wu and Huang. Sadly, I was the only one to survive out of the first six runners.

As I continued to ascend, I wrestled against the force of the wind, falling down at least 10 times. I could feel my body growing stiff, and I was gradually losing control over my limbs. Finally, I fell down and couldn’t get back up. I quickly covered myself with an insulation blanket, took out my GPS tracker and pressed the SOS button. After that I lost consciousness.

I spent approximately two and half hours like that before a passing sheepherder came across my unconscious body. The older man carried me on his shoulders to a cave where he made a fire to warm me, took off my wet clothes and wrapped me in a quilt. I came to about an hour later.

By that time, there were other runners keeping warm in the cave as well. None of them were in very serious condition. Because our location was difficult for the rescue workers to reach, the other runners had been waiting for me to wake up so that we could descend the mountain together. When we arrived back at the foot of the mountain, medics and armed police were there from Baiyin. They continued searching the area throughout the night. Last night, since posting a video online to inform netizens of my safety, I haven’t slept at all, just waiting for the final results of the search.

Other than some numbness in my hand and some skin trauma, my body has largely recovered. I plan to return to my hometown to be with my family, so that they may rest at ease. I’m grateful to everyone online for their concern. And as a runner in this competition, I also feel extremely grieved by this accident. I would like to express my deepest condolences to my fellow runners who have passed away. May they rest in peace.