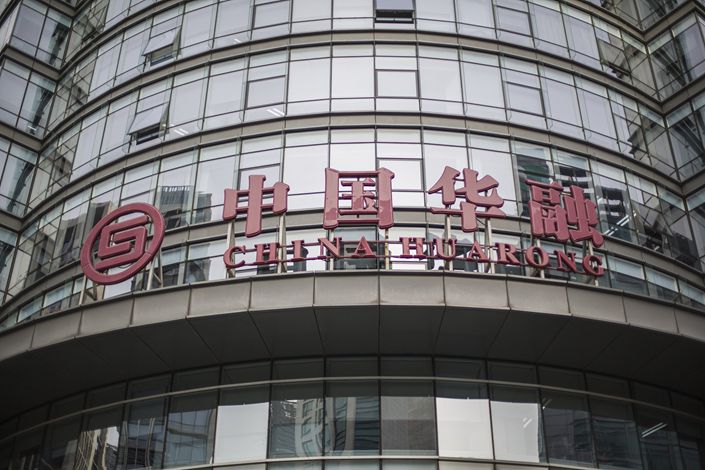 Beijing’s silence over Huarong’s fate is unnerving investors amid concern the company will struggle to repay its debts without inflicting losses on bondholders. Photo: VCG

(Bloomberg) — China’s repo market shows just how risky China Huarong Asset Management Co. Ltd.’s bonds are perceived to be within the Chinese mainland, despite being majority-owned by the finance ministry.

Borrowers putting up a Huarong Securities 2023 bond for collateral now get just 40% of the note’s face value as cash, down from 91% at the start of April, according to China Securities Depository and Clearing Corp. data.

The decline in effective value illustrates the stunning loss of confidence in a company that’s crucial to China’s banking system. Given the size of Huarong’s outstanding yuan bonds — $18.5 billion worth — and its former quasi-sovereign status, the company’s notes are likely to have been widely used as collateral for repurchase agreements.

Beijing’s silence over Huarong’s fate is unnerving investors amid concern the company will struggle to repay its debts without inflicting losses on bondholders. Fitch Ratings and Moody’s Investors Service downgraded Huarong in late April, highlighting a lack of clarity over the scope of the central government’s support. Speculation over Huarong’s financial health has swirled ever since the firm delayed its 2020 earnings results.

Investors have become dependent on a drip-feed of media reports for insight in the absence of official statements. Huarong is “nowhere near” defaulting on its more than $20 billion in offshore bonds, the managing editor of Caixin Media wrote in an opinion piece dated Saturday. The New York Times reported last week that the central government is in the early stages of a plan to overhaul Huarong — one that would inflict “significant losses” on both domestic and foreign bondholders.

Huarong has been repaying its maturing bonds on time and said as recently as May 13 it had seen no change in government support. The company has the equivalent of about $2.5 billion in offshore and onshore bonds coming due through August, data compiled by Bloomberg show.

In China’s pledged repo market, the country’s smaller banks and broker-dealers get needed financing by pledging securities they hold in return. In the event of a seller default, the repo buyer can seize the securities to compensate for the loss. While most bonds trading in China are eligible as collateral regardless of their credit rating, counterparties typically tend to prefer government or corporate bonds issued by state-backed enterprises — like Huarong — to lessen the risk.

Huarong Securities’s 2023 yuan bond was rated AAA at China Lianhe Credit Rating. It traded around 85 yuan on Monday, according to Bloomberg-compiled data.

The Shanghai stock exchange is emerging as a key market for repos, where more than 23 trillion yuan ($3.6 trillion) of the instruments changed hands in April. On exchange, the CSDC acts as the central counterparty to sellers and buyers. Most transactions still occur in China’s interbank market, where there’s little transparency and haircuts tend to be larger than on exchange.

Credit risk is an important component of China’s money market. In November, a string of defaults at some state-backed companies meant China’s big banks were unwilling to lend to smaller firms, freezing the repo market before the central bank stepped in to inject liquidity.

If concern that Beijing won’t backstop large SOEs gets out of hand, the effects could be widespread given the importance of their bonds as collateral in the repo market.