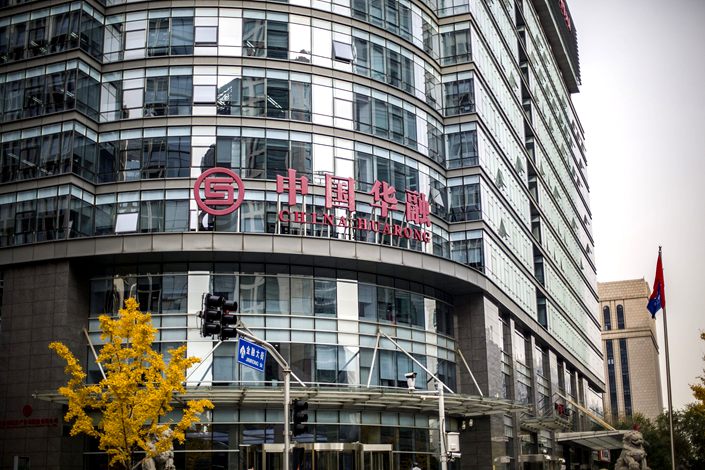 While Huarong’s longer-dated bonds still trade at levels that imply a high risk of default, the state-owned company has yet to miss a debt payment. Photo: VCG

(Bloomberg) — China Huarong Asset Management Co. Ltd. made the biggest bond payment since confidence in its financial health began plunging two months ago, adding to signs that the company still has access to near-term liquidity.

Huarong wired funds for a $900 million dollar bond due June 3, a person familiar with the matter said, asking not to be identified discussing private information. One of the company’s onshore units also paid a 500 million yuan ($78 million) bond that matured Sunday, people familiar said.

While Huarong’s longer-dated bonds still trade at levels that imply a high risk of default, the state-owned company has yet to miss a payment since it spooked investors by failing to report annual results at the end of March. Huarong has reached funding agreements with state-owned banks to ensure it can repay debt through at least the end of August, by which time the company aims to have completed its 2020 financial statements, people familiar with the matter said earlier this month.

China’s biggest bad-debt manager is trying to overhaul its business after an ill-fated expansion under former Chairman Lai Xiaomin, who was executed for crimes including bribery in January. The company has become a closely watched proxy for Beijing’s willingness to backstop government-owned borrowers amid a record wave of corporate defaults.

Senior Chinese officials have so far been silent about whether the government will help Huarong meet its obligations, fueling concern among bondholders that the company will be allowed to default as part of a campaign to rein in moral hazard. Yet even if a default is part of Beijing’s long-term plan, authorities may be keen to avoid any major market disruptions around the politically sensitive 100th anniversary of the ruling Communist Party on July 1.

Huarong has to repay or refinance about $6.2 billion of local and offshore bonds this year, including the domestic note that matured Sunday and the dollar bond due June 3, Bloomberg-compiled data show. The company declined to comment on its debt payments.