Singapore Won’t Be Left Behind as Developed Economies Open Up, Prime Minister Says 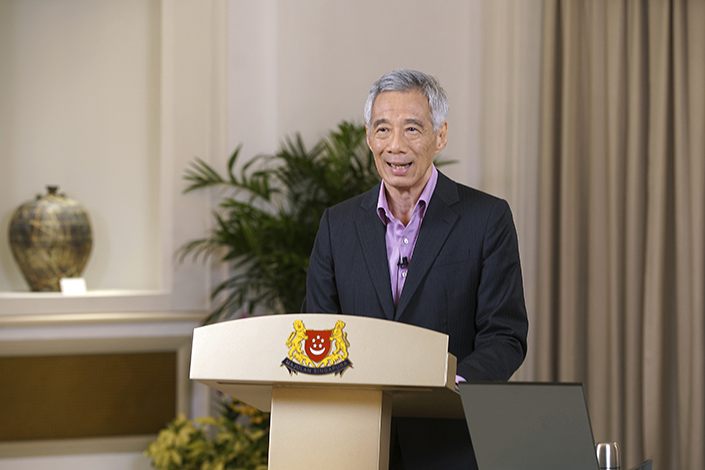 Besides Singapore’s playbook of fast testing and contact tracing, increasing vaccinations will be key to keeping Covid-19 under control as the country opens up, Prime Minister Lee Hsien Loong said Monday.

Lee pledged Singapore would not be left behind as developed economies reopen, marking an intention to shift away from the strict containment approach that’s helped some Asian places eliminate the virus, but which leaves them increasingly isolated.

The country wouldn’t be stuck in a Covid-19 malaise, and tourists will be welcomed, people can go for sports events, even ditch wearing a mask outdoors, Lee said. As part of its strategy to reopen, school kids would be inoculated next month, and every adult who wants a shot would have one by early August.

The prime minister noted residents will soon have access to more vaccines. Currently, only two vaccines — those from Pfizer-BioNTech and Moderna — have been rolled out by the country’s health authorities. Lee said the government has ordered shots from China’s Sinovac Biotech Ltd.

Health Minister Ong Ye Kung said the country currently has more than 200,000 doses of the Sinovac vaccine. Once the World Health Organization (WHO) adds the Chinese vaccine to its emergency use list, “we will start using it at once,” Ong said.

Private medical institutions will also be allowed to purchase vaccines approved by the WHO, the minister said, including those from Pfizer, AstraZeneca, Moderna and Chinese drugmaker Sinopharm. Residents can then get these vaccines at their own expense.

Lee’s speech comes as Singapore faces growing pressure to chart a path to normalization and revive its trade-reliant economy. It’s one of a handful of Covid havens that have succeeded in limiting local transmission, though that success risks becoming a straightjacket as officials impose aggressive restrictions to try to stamp out every small flare-up. These places, which include Hong Kong, the Chinese mainland, New Zealand and Australia risk being left behind as other economies accept that Covid-19 is endemic and move on.

Lee said that the city-state would eventually become more tolerant to infections and accept that the coronavirus is here to stay.

“In this new normal, we will have to learn to carry on with our lives even with the virus in our midst,” he said. “As long as our population is mostly vaccinated, we should be able to trace, isolate, and treat the cases that pop up, and prevent a severe and disastrous outbreak.”

“Countries which are united, disciplined and put in place sensible safeguards, will be able to re-open their economies, re-connect to the rest of the world, grow and prosper,” Lee said. “Singapore will be among these countries.”

Restrictions on track to ease

After June 13, Singapore is likely to ease restrictions that have been put in place for four weeks, if the recent outbreak driven by more contagious variants of the virus is seen to be coming under control. Still, it’s unlikely that all the recent measures will be removed as the easing will be done in a controlled manner, officials said at a briefing following Lee’s speech.

The country reported 23 new confirmed cases on Monday, with 16 community infections. Singapore has reported more than 62,000 Covid-19 cases with 33 deaths since the start of the pandemic.

The country’s rise in cases, including some from a more contagious variant of the virus first identified in India, prompted authorities to reimpose some lockdown-like conditions for a month from May 16. The measures include a ban on dining-in, a return to work-from-home and limiting outdoor group sizes to a maximum of just two. Due to the spike, Singapore this month fell one place from its top notch in Bloomberg’s Covid Resilience Ranking.

“Barring another super-spreader or big cluster, we should be on track to bring this outbreak under control,” Lee said, stressing the importance of testing, contact tracing and vaccination in the country’s reopening strategy. “We will know for sure in another week or so.”

Meanwhile, bookings for more than 400,000 students to get their shots will open June 1 with priority given to those sitting national examinations. Inoculation for young adults aged 39 years old and younger will take place after that, around mid-June.

With faster and cheaper testing that might also involve over-the-counter DIY tests, Singapore will be able to routinely test individuals whose jobs involve close contact with many people such as sports and fitness instructors. Lee said authorities will also routinely test people who appear well, arguing that extensive testing will allow the country to resume larger scale gatherings or events, such as concerts or wedding receptions.

“Testing is essential for us to quickly detect and isolate those who have been infected,” Lee said in the speech. Testing will be normalized, fast and easy to operate, he added.

Since the end of last year, the country has rolled out a Covid-19 antigen rapid test which produced results faster than other testing methods, Lee said. These tests are able to return results within 30 minutes and have been used in large scale gatherings and wedding banquets, he added.

Lee said the nation’s target is to get two-thirds of its residents vaccinated with at least a first dose and it should be able to do this by early July, provided supplies come in as planned.

He flagged there will be faster vaccine deliveries over the next two months, allowing the country to further speed up inoculation. Singapore earlier said it will lengthen the time between vaccination doses to six to eight weeks, in an effort to stretch out limited supply.

“Everyone who is eligible for a vaccination and wants one should be able to get at least their first jab by National Day,” a day to mark the nation’s independence which falls on Aug. 9, Lee said.

As of May 30, nearly 2.3 million people, or about 40% of the population, have received at least the first dose of a vaccine, according to the latest government statistics.

Singapore has been on a bumpy path to reopening. Prior to the latest flareup, the city was pushing forward with high-profile initiatives designed to showcase its containment of the virus, like a travel bubble with Hong Kong and hosting international conferences like the World Economic Forum. These all had to be scrapped earlier this month as the new outbreak flared, forming clusters at the airport, a public hospital and shopping malls.