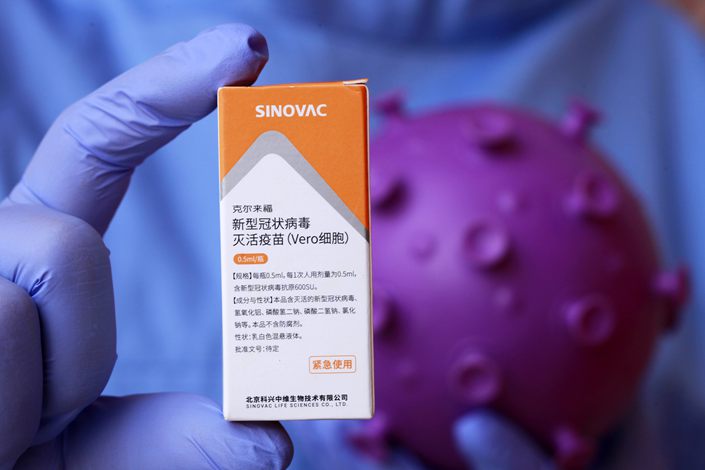 (Bloomberg) — China’s Sinovac Biotech Ltd. received long-awaited World Health Organization authorization of its Covid-19 vaccine, paving the way for a wider rollout of the controversial shot in countries scrambling for a supply of immunizations.

The WHO recommended its use for people aged 18 and older in a two-dose schedule with a spacing of two to four weeks between shots, according to a statement Tuesday.

The emergency use listing granted to Sinovac’s shot is the second given to a Chinese Covid vaccine, after state-owned Sinopharm Group Co. secured WHO’s nod for emergency use in early May. They will be additional inoculation options for Covax, a program backed by WHO and other global health groups dedicated to ensuring every country has access to vaccines — notably poorer nations that have been shut out as wealthier ones snap up most of the world’s existing supply.

Already cleared for emergency use by the WHO are vaccines from Pfizer Inc. and partner BioNTech SE, AstraZeneca Plc, Johnson & Johnson and Moderna Inc.

The WHO’s green light bestows global legitimacy on a Chinese shot that has battled concerns about its efficacy after divergent data was reported from trial sites. It could provide assurance for developing countries that lack their own regulatory bodies and rely on the organization’s advice on which shots are safe to use. Sinovac has shipped 380 million doses to countries and region ranging from Hong Kong to Zimbabwe since late last year.

The shot, dubbed CoronaVac, has the lowest efficacy rate reported from clinical trials among the frontrunner wave of vaccines: it was found to be just 50.7% effective in preventing symptomatic Covid in a trial in Brazil, barely crossing the minimum threshold required by drug regulators around the world. But real world evidence is emerging that it’s far more effective on the ground: In a recent study of around 130,000 Indonesia health workers, it protected 94% against symptomatic infection, 96% against hospitalization, and 98% against death.

Infections are also on the rebound in some countries that have rolled out Sinovac locally like Chile, fueling doubt on its effectiveness, though hasty reopenings and the spread of virus variants also play a part in the renewed outbreaks.

The WHO nod also paves the way for countries to allow travelers who have received Sinovac shots, even if the vaccine isn’t approved for use locally. Ahead of a planned reopening to vaccinated tourists this summer, the European Union said that member countries can consider opening up to people who have shots approved by the WHO. The company has also started submitting data on a rolling basis to drug regulator the European Medicines Agency.

The Sinovac vaccine contains the inactive forms of the SARS-CoV-2 viruses, which are injected to stimulate an immune response against the pathogen. Two other similar shots have been developed by China’s Sinopharm, including the one already cleared by WHO. They have all been widely used in the mainland since mid-2020.