By Zheng Lichuan and Wang Xintong 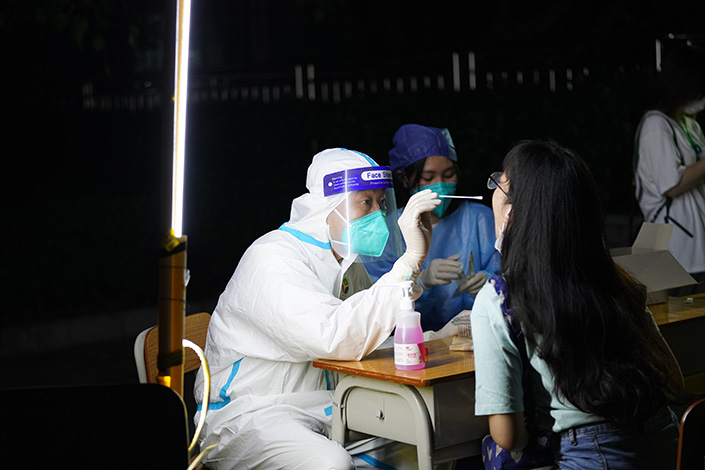 Zhongshan, a city of more than 3 million residents in South China’s Guangdong province, has launched a citywide testing for Covid-19, becoming the third city to do so after Guangzhou and Foshan in the province’s latest flare-up.

Since Sunday, all residents have begun receiving nucleic acid tests in batches, as local authorities try to block the spread of the coronavirus from nearby cities, according to a notice issued by the city government.

The testing is expected to be completed within five days, the notice said, adding that newborns and babies who haven’t received national ID cards can use their household registration, or “hukou,” document for testing.

Guangdong is ramping up testing to contain its current flare-up which has seen more than 100 local infections since May 21. The province confirmed (link in Chinese) four locally transmitted cases on Sunday, including three in Guangzhou and one in Shenzhen.

Guangzhou, where more than 80 Covid-19 cases have been detected, has launched testing for all of its 15 million residents on Friday. The city’s 11 districts have announced plans to complete testing within three days, while Liwan, the center of the city’s latest outbreak, has kicked off its third round of testing.

Earlier this month, local authorities confirmed that all patients in Guangzhou were infected with a highly transmissible variant of the coronavirus first identified in India. As many patients who contracted the virus showed no symptoms such as fever and cough initially, mass nucleic acid testing has become the most important means for detecting the virus, according to Cai Weiping, chief infectious diseases expert at Guangzhou No. 8 People’s Hospital.

The latest outbreak in Guangzhou also spread to Foshan, a neighboring city of more than 7 million residents, which is conducting a citywide testing through Monday. Local authorities have issued a notice requiring residents who want to leave the city to present a negative Covid-19 test for the preceding two days.

Authorities in the Futian district in Shenzhen are testing all of its 1.7 million residents through Monday as the city has reported 16 new infections amid its Covid-19 flare-up. Longhua district has also required medical workers responsible for vaccination work to participate in virus testing to alleviate a “shortage of the city’s nucleic acid testing staff,” Caixin has learned.

The tech hub’s Longgang district reported one confirmed case on Sunday who had previously tested negative for 11 times. The 45-year-old patient surnamed Luo is a worker at Yantian Port, where the first patient in the current flare-up in Shenzhen was found, local authorities said. The Yantian district completed its fourth round of testing for all residents on Saturday.