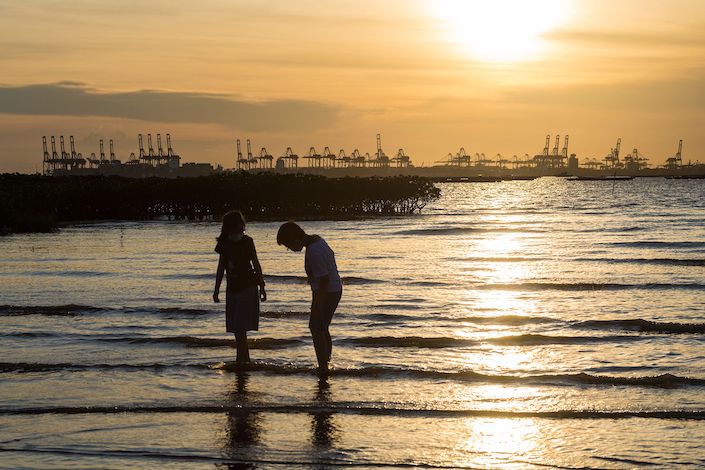 Children play in the sea in front of the mangroves of Ha Pak Nai with the city of Shenzhen in background.

(Bloomberg) — For the second time in six months, Chinese provinces are rationing electricity as the nation’s grids struggle to manage a surge in demand. This time, it’s partly because residents are blasting their air conditioners to keep cool during an unusually warm springtime.

Cities in Guangdong, a manufacturing hub in the south that’s home to 130 million people, have been limiting power use by factories since mid-May. Some plants have been forced to shut for several days a week. On Weibo, a Twitter-like social media platform, business owners complained about losing money and asked for patience from customers whose deliveries were delayed.

“Cutting the power three days a week is a death sentence to a factory,” said one user. “Now we have bought three giant generators, and the whole industrial park smells of diesel.”

It’s the latest sign that Chinese authorities are having a hard time balancing the country’s climate goals and economic development targets. Along with the heat, an economic rebound led by exports and heavy industry is also causing a surge in electricity demand just as new safety and environmental constraints lower production at coal mines that power large parts of the country.

The rainy season in southern China started 20 days later than usual, according to state news agency Xinhua, affecting the generation of hydropower. Neighboring Yunnan province, which relies on hydropower and supplies about 18% of all energy used in Guangdong, received 41% less rain than usual in the first quarter. Its reservoirs recorded the lowest water levels in years.

Warnings of electricity rationing have also been issued in other areas. Shandong, a coastal province in the north with more than 100 million residents, said it will be short by as much as 6 gigawatts of power at peak times this summer. Zhejiang, another factory heartland in the east, foresees a 2 gigawatt deficit.

“The risks from climate change are growing — not only the physical risks like extreme heat and drought but also the challenges to the power grid when faced with extreme weather,” said Liu Junyan, a campaigner for Greenpeace East Asia. “The grid needs to be more resilient to climate-related demand spikes.”

Take Hunan province in south central China. After a power supply shortage last winter, it announced plans to build 12 gigawatts of new coal-fired power capacity by 2025 — more than half its existing capacity.

“Hunan will face pressure from both emission reduction and energy security,” one of the province’s top officials warned at an annual gathering of top leaders in March.

“Building more coal power projects as a solution to spiking power demand, which itself is caused by climate change, is such a wrong way to go,” Liu said, “The approach to ‘energy security' should be building a cleaner, more flexible, sustainable power system instead.”

The seasonal power shortages are likely to persist as officials balance competing demands. Local governments are under pressure to deliver plans to top out and start reducing emissions. Some may choose to fall back on a familiar strategy by setting sweeping targets for capacity cuts rather than working out a less carbon-intensive development model or improving coordination between different regional utilities.

“If you look at China’s power grid as a whole, it has more capacity than needed, but the issue is the low efficiency of cross-province transmission,” Refinitiv’s Qin said. “China faces a lot of unique challenges on the way to becoming carbon-neutral, and there isn’t a 'one size fits all’ solution.”