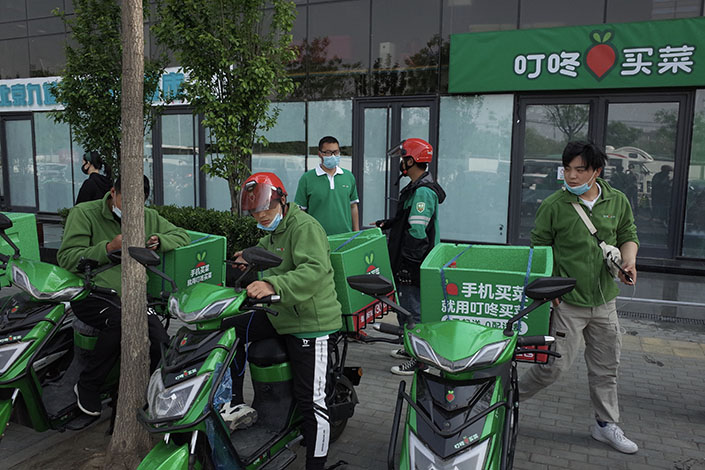 Dingdong Maicai, an app backed by big-name institutional investors including Sequoia Capital and Tiger Global Management, plans to list on the New York Stock Exchange, according to a Tuesday filing to the U.S. Securities and Exchange Commission.

It was joined by Tencent-backed Missfresh Ltd., which said in a separate filing to the commission that it plans to float on the Nasdaq.

Demand for online grocery services has surged in China since the start of the Covid-19 pandemic. Experts say stay-at-home orders and other social distancing measures have accelerated a shift toward grocery apps that were already growing in popularity thanks to urbanization, rising incomes and growing food-safety awareness.

With the domestic market poised for rapid growth in the next few years, upstarts like Dingdong and Missfresh are jostling for space alongside internet giants like Alibaba Group Holding Ltd. (9988.HK) and group-buying pioneer Pinduoduo Inc.

Dingdong plans to list its shares under the ticker “DDL,” according to its filing. Morgan Stanley, BofA Securities, Credit Suisse and Mission Capital are underwriting the IPO.

Neither of the disclosures specified the number of shares each company plans to sell or how much they plan to sell them for.

Founded in 2017, Dingdong is headquartered in the eastern city of Shanghai and operates in 29 cities across China. The company’s revenues nearly doubled last year to 11.34 billion yuan ($1.77 billion), while its net losses rose 70% year-on-year to 3.18 billion yuan, its filing says.

Missfresh was established in 2014 and is based in the Chinese capital, Beijing. The firm said it whittled down its net losses to 1.65 billion yuan last year from 2.91 billion yuan in 2019, while revenues rose 2.15% to 6.13 billion yuan over the same period.

Both companies are flush with cash after recent funding. Last month, Dingdong raised $330 million in investment round led by Softbank Vision Fund, bringing its total new funding to $1.03 billion since April.

In December, Missfresh raised around 2 billion yuan ($313 million) in a funding round led by three Chinese investment entities, according to online business directory Crunchbase. The sum beefed up the $495 million windfall the company received in a July round led by CICC.

The two apps are far from the only Chinese grocery services drawing attention from investors. Earlier this year, rivals Xingsheng Youxian reportedly raised $2 billion in a Tencent-led funding round, and Nice Tuan secured $750 million in investment from firms including Alibaba.