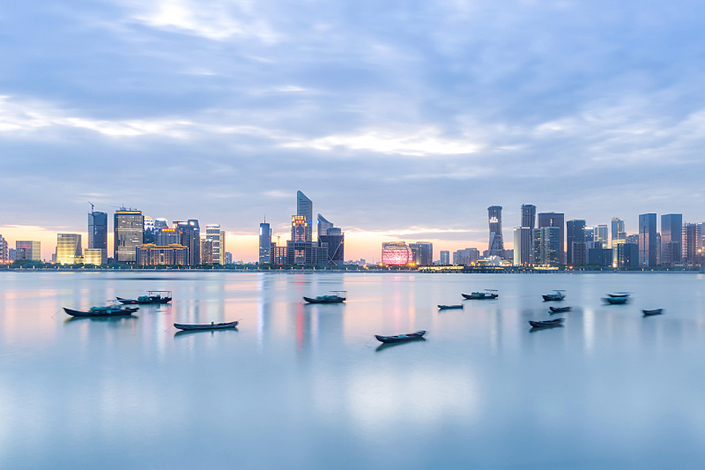 Night view of the Hangzhou on April 12. Photo: VCG

East China’s Zhejiang province plans to raise its per capita GDP by 30% and narrow the income gap between rural and urban residents, as it becomes a pilot zone for President Xi Jinping’s grand vision of “common prosperity.”

The province aims to raise its GDP per capita to 130,000 yuan ($20,340), the level of moderately developed countries, by 2025, according to the guidelines jointly released by the Central Committee of the Communist Party of China and the State Council, China’s Cabinet, on Thursday.

Zhejiang’s per capita GDP last year was about 100,000 yuan, according to Caixin calculations based on economic data published by state-run newspaper China Daily. The province has a population of 64.56 million, ranking it the 8th most populous in the country, with 72.17% of people living in urban areas and 27.83% in rural regions, according to statistics from the provincial government.

In addition to the per capita GDP target, Zhejiang also aims to raise average per capita disposable income to 75,000 yuan by 2025, according to a provincial government statement issued Friday.

This compares with average per capita disposable income for urban residents of 62,699 yuan last year and 31,930 yuan for rural residents, according to provincial data.

Inequality between regions and the income gap between rural and urban areas is a major problem in China. In a speech last year, Chinese President Xi Jinping stressed the need for the country to promote “common prosperity,” as it’s “an essential requirement of socialism,” the state-run Xinhua News Agency reported.

“Promoting the common prosperity of all is a long-term and arduous task, which requires selection of some areas for early and pilot implementation and demonstration,” the guidelines said.

According to the guidelines, the eastern province aims to narrow the gap between urban and rural development, raise living standards, and improve social welfare. It will also deepen the reform of the income distribution system and “reasonably adjust excessive income.”