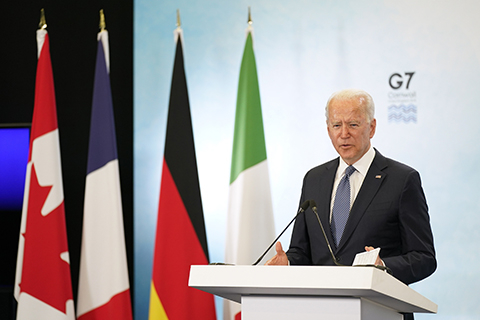 The Chinese embassy in the U.K. on Monday criticized a statement by the leaders of the Group of Seven (G-7) for the “deliberate slandering” of China, accusing the countries’ leaders of “gross interference” in its internal affairs.

The joint statement, issued by the leaders of the G-7, a club of the world’s seven top industrialized nations, during their summit in the U.K. on Saturday, criticized, among other issues, China’s conduct in Xinjiang and Hong Kong, and expressed concerns over the situation in the Taiwan Strait.

China’s embassy in the U.K. hit back with its own statement, expressing “strong dissatisfaction and firm opposition.” It denounced the G-7 summit as “block and power politics in a ‘small circle’ that intentionally creates confrontation and division.”

“We urge the United States and other G-7 members to respect the facts, understand the situation clearly, and stop smearing China, interfering in China’s domestic affairs and harming the Chinese side’s interests,” the embassy said.

In the joint statement, the G-7 leaders, from the U.S., the U.K., France, Germany, Japan, Italy and Canada, also called for “a timely, transparent, expert-led, and science-based WHO-convened Phase 2” investigation into the origin of the Covid-19 pandemic.

In response, the Chinese embassy accused some politicians from the U.S. and several other countries of politically manipulating the Covid-19 origin investigation.

“A certain country even used its intelligence agencies in [the virus’] origin-tracing, whose political motives are abundantly clear, ” the statement said, referring to the U.S. President Joe Biden’s ordering American intelligence community to investigate the origin of Covid-19 last month.

Regarding to China’s business practices, the G-7 leaders also said “we will continue to consult on collective approaches to challenging nonmarket policies and practices which undermine the fair and transparent operation of the global economy.”

In response, the Chinese embassy said in its statement that it is the U.S. that is attacking Chinese companies under the pretext of national security, which is a “typical non-market policy that violates the market competition rules of the World Trade Organization.”

In a separate Saturday statement, the Chinese embassy in the U.K. rebuked the U.S. for advocating “rules-based international system” during the G-7 summit.

The G-7 countries also endorsed a grand infrastructure plan, known as Build Back Better World (B3W) to compete with China’s multitrillion-dollar Belt and Road Initiative in the developing world.

German Chancellor Angela Merkel said Sunday that she hoped that a new G-7 task force could present first infrastructure projects of the B3W plan in 2022, when Berlin takes over the G-7 presidency.