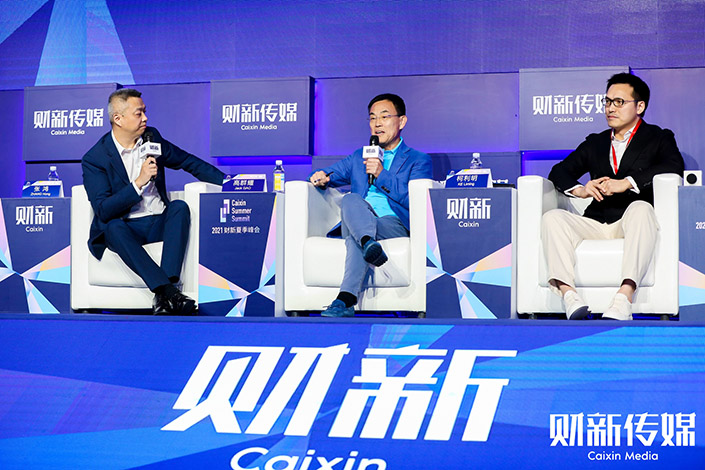 The future of China’s film industry lies in online streaming platforms that allow users to watch movies on demand and collect data about their viewing habits, senior executives said.

But such platforms face significant barriers to profitability and intense competition from short-video platforms, said attendees at the Caixin Summer Summit 2021 on Thursday in Beijing.

The discussion between Jack Gao, the chairman and CEO of Smart Cinema, and Ke Liming, the CEO of Shanghai Ruyi Film Production Co. Ltd., came as China’s movie sector continues its recovery from the impact of the Covid-19 pandemic, when cinemas were temporarily shuttered.

China’s cinema industry has become highly “aristocratic” amid rising ticket prices and falling attendance, with fewer than three in 10 people in the country going to a movie theater each year, said Gao, whose company allows viewers to pay to watch new releases on their personal devices.

The problem is caused in part by the one-to-many model of traditional cinemas, which can only show films at fixed times and places and have limited screening schedules, resulting in many movies being left unfinished because no theaters can fit them in, Gao said.

By comparison, streaming platforms allow users to watch movies on demand and have no technical limits to the number of films screened at the same time, making it easier for moviemakers to carve out a space in both the domestic and foreign markets, Gao said, adding that around 300,000 people watch films on Smart Cinema each day.

But the model still faces significant hurdles to winning over Chinese consumers. Online film platforms are increasingly competing for attention with short-video platforms like Douyin — China’s TikTok twin — and Kuaishou, a trend that may force some moviemakers to adapt their content, said Ke.

“If the first 30 minutes of your film aren’t good, then you may as well not shoot it,” he said, adding that he believed creative, high-quality movies could still overcome the trend toward short-format entertainment.

Filmmakers can also earn longer-term revenues from their works by selling their copyrights to online platforms after their screening runs at brick-and-mortar cinemas, Gao said. However, the limited amount of income that platforms make through advertising is unlikely to displace box office receipts as a principal revenue stream, he added.

The popularity of mobile devices offers more channels for content consumption in the future, and successful cultural products will make good use of viewers’ fragmented time and attention, said Ke, adding that future Chinese movies would likely be shown both online and offline.