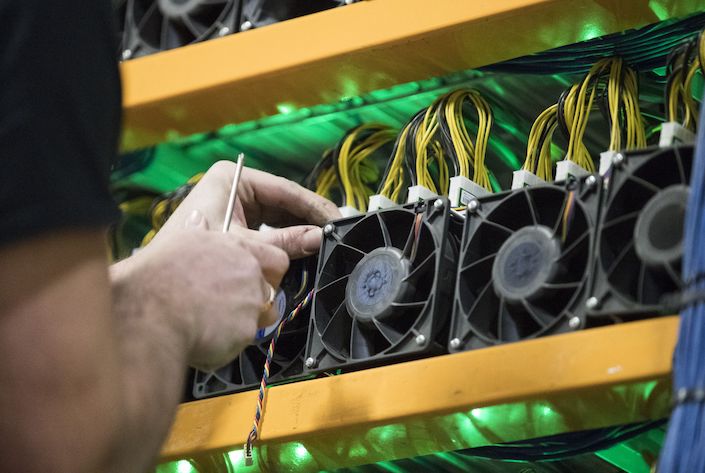 (Bloomberg) — The heads of some of the world’s biggest cryptocurrency exchanges say Bitcoin miners are shifting operations out of China as authorities intensify a sweeping crackdown.

“We’re seeing a lot of those miners moving out of China to other places,” said Changpeng “CZ” Zhao, the CEO of Binance Holdings Ltd., the world’s biggest crypto exchange by reported turnover, in an interview Tuesday at the Qatar Economic Forum. “Some of them are sending their mining equipment overseas. There are big shipments.”

China’s moves have injected uncertainty into the cryptocurrency market and helped pull Bitcoin down to the lower end of its recent trading range. The token briefly fell below $30,000 Tuesday after reaching nearly $65,000 in mid-April. The hashrate, which measures the processing power used in Bitcoin mining and is used as a proxy for mining activity, has also dropped by about 40% in the past couple of weeks, according to data from BTC.com.

While a lower hashrate is often portrayed as a negative for Bitcoin, a temporary disruption of mining power as rigs are moved out of China could also be embraced by some Bitcoin bulls who argue that a concentration of mining capacity has long been a vulnerability for an asset prized by proponents for its independence from governments and central banks.

“In the future you’ll have a different geographical distribution of hashpower,” Sam Bankman-Fried, the former Jane Street trader who now runs the crypto derivatives exchange FTX, said Thursday in an interview. “It’s expensive to move rigs, but it’s not impossible.”

The Global Times reported that multiple Bitcoin miners in China’s Sichuan province were closed Sunday as authorities intensified their crackdown. On Tuesday, Bloomberg reported that China summoned officials from its biggest banks to reiterate rules issued in 2013 that ban cryptocurrency services.

China’s measures mean the country’s share of Bitcoin mining could fall from 65% to less than 50% by the end of the year, according to Dan Weiskopf, co-portfolio manager of the Amplify Transformational Data Sharing ETF, an actively managed exchange-traded fund that’s composed of blockchain-related stocks, with about 20% of its portfolio in crypto miners.

Alternate destinations for Chinese mining operations include Russia, Kazakhstan and Texas, according to market participants. Weiskopf cited Canada, Sweden and Argentina as other possibilities.

“The decline in hash is probably a short-term phenomenon and evidence of China miners coming offline,” he said in an e-mail. “It is a net positive for North America miners who are now expanding and scheduled to have a lot of hash come online later in 2021 and into 2022.”