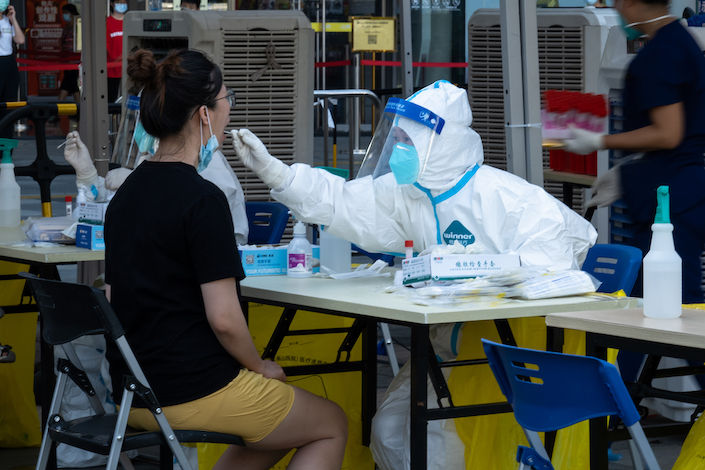 Shenzhen deployed 49,500 health-care workers and 78 testing institutions to conduct citywide nucleic acid testing over three days starting June 21 after a cluster of new infections was confirmed near the city’s airport, according to Chang Juping, deputy head of Shenzhen’s health authority. As tests were completed June 23, no positive results were detected, Chang said.

The southern China metropolis stayed on high alert and imposed partial lockdown measures after new flare-ups involving new variants of the coronavirus appeared in the city since late May.

Several recent cases in Shenzhen were traced back to a passenger from the city’s airport who was diagnosed with the highly transmissible Delta variant first found in India. Between June 10 and 22, four related infections were recorded in Shenzhen. An additional three cases linked to the cluster were found in the neighboring city of Dongguan.

Following the outbreak, Shenzhen imposed partial lockdowns in areas related to the cases and canceled hundreds of flights. No new cases were linked to the airport cluster since June 23, according to the health authority. But the airport is still operating at about 60% below its previous capacity because of the virus control measures, said Chen Fanhua, general manager of the airport operator,.

The airport will assess the situation and gradually resume more flights, Chen said.

Another earlier cluster in Shenzhen appeared among workers at the Yantian International Container Terminal, one of China's busiest container ports. Since the first patient was confirmed May 21, four infections and 12 asymptomatic cases were recorded among people related to the port. Most of the cases were the Alpha variant first detected in Britain.

The port of Yantian was closed for virus control, sending ripples through the global shipping market.

No new cases related to the port have been reported since June 7. On Thursday, the Yantian port resumed full operation.

In addition to Shenzhen, sporadic flare-ups were reported in other cities in Guangdong, including the capital city Guangzhou, underscoring the challenges to containing the fast-evolving virus.