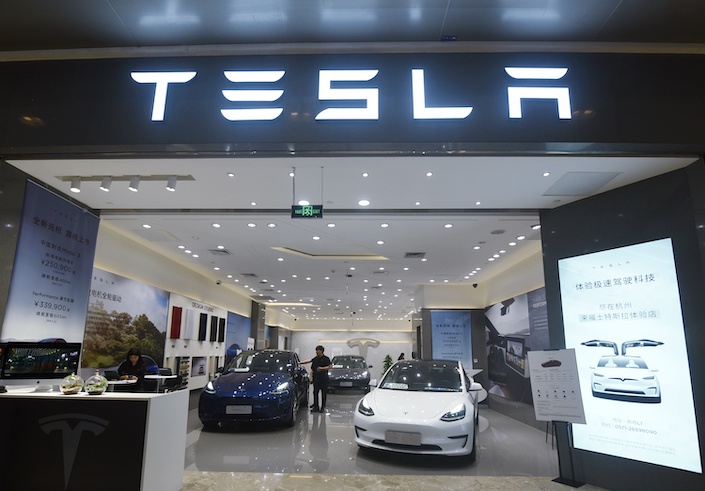 A Tesla store in Hangzhou June 28.

China’s national carbon trading market is likely to expand to cover industries such as cement and aluminum next year, Tsinghua University climate expert Zhang Xiliang said Thursday at a forum. The market will be up and running by the end of June and will move beyond the power sector to include other industries as soon as possible, Zhang said at an event on China’s policies for achieving carbon neutrality. “The cement industry will definitely be included next year, as well as electrolytic aluminum,” said Zhang, head of the technical panel on the overall design of China’s national emissions trading system. “The market is expected to cover eight sectors,” including steel and chemicals, during the 14th Five-Year Plan period (2021–25), he said.

Tesla Inc. plans to recall more than 285,000 electric vehicles sold in China to address risks associated with its autopilot feature after an investigation conducted by the country’s market regulator. The electric-car maker will recall 211,256 locally produced Model 3 vehicles and 35,665 imported ones as well as 38,599 China-made Model Ys because their autopilot systems are too easily activated during a drive and could potentially lead to crashes, the State Administration for Market Regulation said Saturday in a statement. Tesla will upgrade the autopilot system for the recalled cars, it said.

China’s top economic planning agency acknowledged that electricity prices are too low for households and too high for businesses, signaling that residential prices might be increased. The National Development and Reform Commission’s (NDRC) statement, published Thursday in response to an online comment, did not say when or by how much prices might rise. In China, residential customers have long paid below-cost prices for electricity subsidized by higher rates for industrial and business users, the commission said.

Chengdu became the third Chinese city to operate two major airports this week, alongside Beijing and Shanghai, with the authorities aiming to turn the new airport into a major transportation hub in the country’s less-developed interior. The first flights took off Sunday from the new, 75 billion yuan ($11.6 billion) Chengdu Tianfu International Airport, the state-run Xinhua News Agency reported. It became the southwestern city’s new primary airport alongside the older Shuangliu International Airport. The new airport will focus on international routes, while Shuangliu will mainly operate domestic flights to cities on the Chinese mainland and to Hong Kong, Macao and Taiwan.

Although coal prices have recently shown signs of a rebound, the rise in coal prices is mainly occurring in markets with a lower volume of trade and outside of medium- and long-term contracts, the government-run Xinhua News Agency reported Sunday, citing an official at the National Development and Reform Commission (NDRC). This is a result of multiple factors, including anticipated growth in energy demand in the summer peak as well as suspended production at some coal mines, the official said. With the growth of hydro and solar power, along with higher-output coal production and imports, the imbalance between coal supply and demand is likely to ease, and coal prices are expected to fall sharply in July, he said.