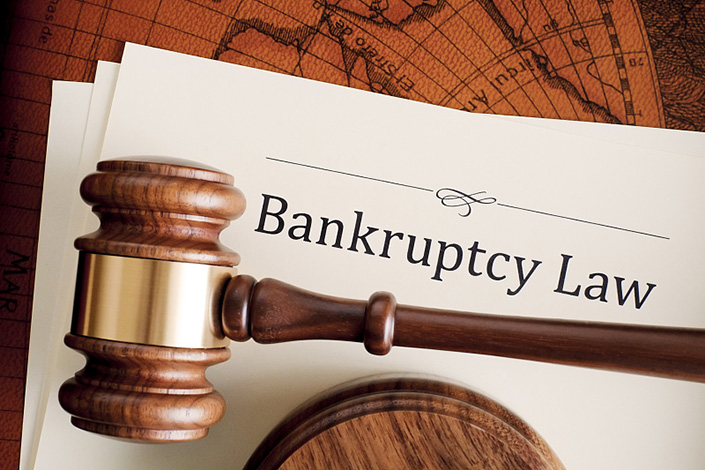 An established cross-border bankruptcy system in China could eventually make it easier for creditors to make a claim. Photo: VCG

Just after South Korea’s Hanjin Shipping Co. Ltd. filed for bankruptcy protection in its home country in August 2016, the company petitioned courts in 43 countries to try to prevent creditors from seizing its vessels.

One place it didn’t seek protection in the end was China, even though the once world’s seventh-largest container shipper had hundreds of creditors with potential claims on its substantial assets in the country.

As a result, many of the Seoul-based company’s assets in China, including its ships, ended up getting sold off to repay some of its Chinese creditors. At the same time, some of Hanjin’s small and midsize creditors in China had a hard time recovering what they were owed.

There were a total of 129 cases involving Hanjin and its subsidiaries filed in China’s maritime courts between August 2016 and February 2017, when it was declared bankrupt in South Korea. The total amount of the claims reached approximately 1 billion yuan ($154 million), according to a paper (link in Chinese) published in The People’s Judicature, a law journal affiliated with the Supreme People’s Court of China.

The chaotic, high-profile demise of Hanjin — one of the shipping industry’s biggest collapses — was among the incidents that have prompted repeated calls from Chinese academics and judges for China to create a system for cross-border bankruptcies involving companies and assets both inside and outside the country.

The Chinese mainland took a step toward establishing such a system last month with the signing of an agreement with Hong Kong on cross-border bankruptcy and restructuring proceedings that aims to give liquidators better access to information needed to maximize the value of recovered assets.

The agreement, which Supreme People’s Court Vice President Yang Wanming and Hong Kong’s Secretary for Justice Teresa Cheng signed in Shenzhen on May 14, designated three cities — Shanghai, Xiamen and Shenzhen — as the first pilot zones for the agreement, given their close economic ties to Hong Kong.

Although the current plan only involves Hong Kong and the three pilot cities, an established cross-border bankruptcy system in China could eventually make it easier for domestic creditors to claim a portion of the overseas assets of a bankrupt company, as well as for foreign creditors to claim such assets on the Chinese mainland.

Liquidators from Hong Kong have long been frustrated while investigating, assessing and recovering assets on the mainland so they can be sold off to repay creditors.

“Previously, although we were appointed as provisional liquidators by Hong Kong courts, without a Chinese mainland court recognizing our duties and rights, we could not even obtain information from mainland banks, let alone handle the mainland assets of the insolvent company,” said Tiffany Wong, managing director at consultancy Alvarez & Marsal’s Restructuring Practice in Hong Kong.

The ability to make such claims is only growing more pressing as more of China’s companies have expanded internationally, investing and setting up subsidiaries abroad. The mainland’s nonfinancial outbound direct investment grew to $110 billion in 2020, nearly double the $59 billion recorded in 2010, according to Ministry of Commerce data (link in Chinese).

“In the long run, there will be greater involvement of Chinese mainland companies in overseas bankruptcy cases,” Song Jianli, a former senior judge of the Supreme People’s Court wrote in The People’s Judicature (link in Chinese) in 2018. “It is likely that there will be more and more (domestic) insolvency proceedings that need overseas courts’ recognition, which can help Chinese companies recover their debtors’ assets located outside of the mainland.”

Neither China’s central government nor the government of Hong Kong has adopted the United Nations Commission on International Trade Law’s (UNCITRAL) Model Law on Cross-Border Insolvency, which provides a framework for foreign courts to cooperate on cross-border insolvency proceedings. Countries including the U.S., the U.K., Australia and Singapore have signed the Model Law, according to the UNCITRAL.

Under Article 5 of China’s Enterprise Bankruptcy Law, the main legislation that governs cross-border insolvency cases, the government does allow a foreign court’s ruling on bankruptcy matters to take effect if the case involves assets held by a debtor within its borders, provided that certain conditions are met.

In practice, however, while courts in some foreign countries have previously given recognition and helped enforce judgments in bankruptcy cases handled by China’s courts, it has not exactly been a two-way street. Judgments or rulings of foreign bankruptcy cases have rarely been recognized by Chinese courts in the past, according to an International Insolvency & Restructuring Report published in June 2020 by finance research firm Capital Markets Intelligence.

There has only been one such recorded case since the Enterprise Bankruptcy Law took effect in 2007, the report noted, in which the Wuhan Intermediate People’s Court in 2012 recognized a bankruptcy ruling made by a German court.

“Article 5 of the current Enterprise Bankruptcy Law is far from sufficient to provide legal support because it is only a provision in principle. We need further clarification and a complete set of specific mechanisms for the content, such as how to determine the competent court, whether to report to the supreme court, and standards for recognition,” said Chi Weihong, a partner and director of bankruptcy reorganization at Tiantong Law Firm in Beijing.

The agreement between the Supreme People’s Court and Hong Kong’s Department of Justice will provide a valuable practical test of the refinement of cross-border bankruptcy laws and regulations, he added.

“The establishment of a cross-border bankruptcy cooperation system is conducive to protecting the property rights of Chinese investors and creditors, and will also allow Chinese debtors to complete a smooth restructuring by integrating global economic resources … the construction of a positive, friendly and open legal environment on the matter will help promote and serve transnational economic activities,” Song wrote.