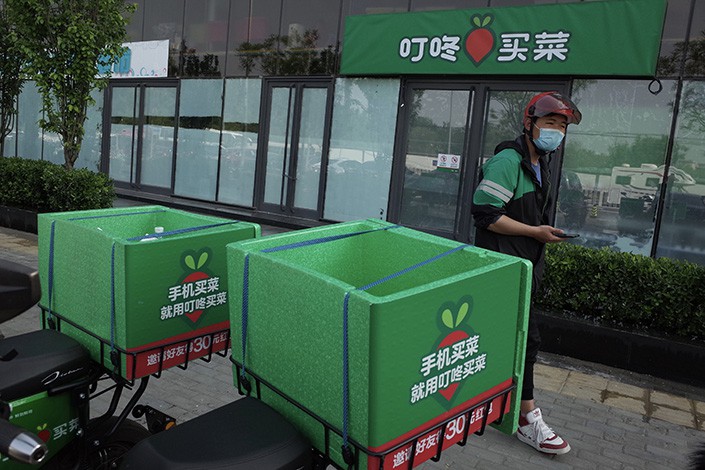 Online grocer Dingdong is expected to set the IPO’s final pricing on Monday night in the U.S. Photo: VCG

Shares of Chinese online grocer Dingdong Maicai closed flat in their debut Tuesday on the New York Stock Exchange after the company radically slashed the size of the initial public offering (IPO) and priced it at the bottom of an expected range.

Dingdong raised $95.7 million in the IPO, selling 4.07 million American depositary shares (ADSs). That was down 70% from the 14 million ADSs the company initially aimed to sell. The IPO was priced at the bottom of the expected range of $23.50–$25.50. The company also cut underwriters’ options for overallotment shares to about 611,000 from the 2.1 million shares previously planned.

Dingdong’s major downsizing came after shares of rival Missfresh Ltd. plunged in their first two days of trading. Tencent-backed Missfresh priced its ADSs at $13 only to see them fall as low as $8.20 on the first trading day last Friday before rebounding to close down nearly 26%. They continued to fall in the second trading day and ended Monday at $8.84 — down about a third from the IPO price. Missfresh’s shares declined a further 2% Tuesday.

The sell-off gave Missfresh a market value of about $2.1 billion. Dingdong, which is roughly twice the size of Missfresh based on revenue, originally targeted a $6 billion market capitalization. The pair are China’s two largest players in a crowded field of companies looking for profits in China’s vast online market for groceries.

“After the weak performance of the Missfresh IPO, it seems that investors’ appetite has certainly soured on the space,” said an analyst at a mid-sized brokerage, speaking on condition of anonymity under company policy. “Dingdong’s smaller deal size may well signal that the market needs more assurance that the company can really deliver on the growth story before investors are ready to stock up on their shares.”

Dingdong is fighting to consolidate its position as the leader in China’s highly competitive online grocery market. Dingdong overtook the older Missfresh last year. But both companies are still losing big money and recently have faced new challenges from bigger, better-funded rivals like e-commerce giants Alibaba, JD.com and Pinduoduo, as well as takeout dining giant Meituan.

All the companies are chasing a Chinese grocery market that was worth 11.9 trillion yuan ($1.8 trillion) in 2020 and is expected to grow to 15.7 trillion yuan by 2025, according to third-party market research cited in Missfresh’s IPO prospectus. The research notes that China’s grocery market is highly fragmented, with the top 10 players accounting for just 6.7% of all sales. The top 10 in the U.S. account for more than half of the market.