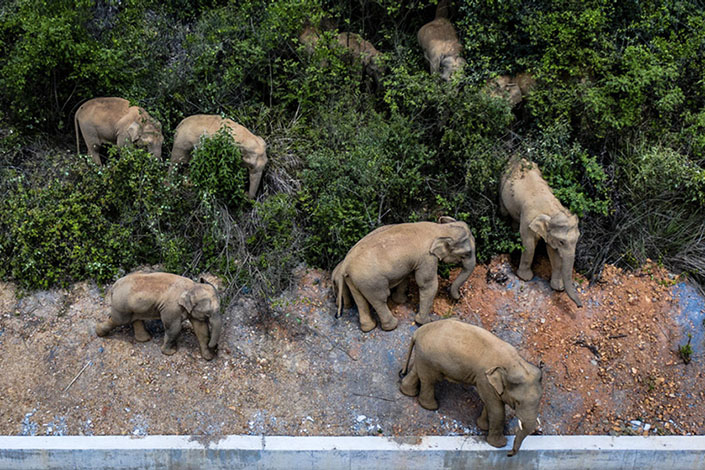 The elephant herd wanders in a woodland in Eshan county, Yuxi, on May 31. Photo: Xinhua

A herd of 14 wild Asian elephants is still on the move in Southwest China’s Yunnan province, heading 1.9 kilometers northeast from Saturday to Sunday, local authorities said, as their unusual journey triggers online discussion and experts agree that loss of habitat is a motivating factor.

Surveys and monitoring in recent years show that the Asian elephants’ traditional habitat has become small and patchy, and rubber plantation expansion has caused them to hunt for better grounds.

Zhang Li, a professor at Beijing Normal University, told Caixin that the depletion of natural forests had forced the wild Asian elephants to go in search of food and the number living in Xishuangbanna area in southernmost Yunnan is currently less than one-third of that in 1975.

Research led by Jin Kun of the Chinese Academy of Forestry indicates there is an area of 4,253 square kilometers in Xishuangbanna that is suitable for the elephants, but it is highly fragmented, disconnected and isolated.

So far, the herd has been on the move for 14 months. They recently entered Eshan county in Yuxi, a city about 90 kilometers (56 miles) south of provincial capital Kunming, where they have been roaming for roughly a week. Before entering Eshan, they had travelled for about 40 days through other counties and cities, leaving damage worth nearly 6.8 million yuan ($1.06 million) in their wake.

Xishuangbanna’s tropical rainforest is home to about 280 of the beasts. However, due to human activities such as the expansion of rubber tree farming, the nature reserves in the prefecture have become increasingly fragmented and isolated over recent decades.

A 2017 study of forest changes in Yunnan showed that the area of natural forest shrank from 69% in the surveyed regions in 1975 to 58% in 2014. Also, the size of rubber tree plantations grew more than 23-fold.

Some experts are also worried that Asian elephant herds isolated in certain areas for decades might become extinct in the near future. Zhang Li said about 20 Asian elephants living in Nangunhe natural reserve, on the border between China and Myanmar, have been isolated since 2004 after farmers planted large areas with rubber trees, leading to deforestation.

“Its like these elephants are trapped on an island and have not communicated with others for decades,” Zhang said. With a decline in population quality, the herd is predicted to be extinct in 16 years, he said.

In order to reconnect fragmented natural reserves and prevent extinction of the elephants, China has rolled out plans to create conservation corridors, the U.K.-based journal Nature reported. However, none of these plans has worked out, Caixin has learned.

Many grassroots officials engaged in the protection of Asian elephants told Caixin that one of the biggest difficulties facing their protection is the lack of central government financial support. Currently, some programs aimed at reducing conflict between people and elephants, including erecting fences and street lighting, are funded by local authorities, however, the source of funds is not reliable, said Zhou Zhitao, a forestry bureau official in Yunnan’s Pu’er city.

Wang Hongxin, another professor at Beijing Normal University, said protection of Asian elephants cannot just rely on measures taken by local authorities. To “systematically” address the problem, it must be raised to the national level with the establishment of the Asian Elephant National Park, Wang said.

The first group of national parks will be officially established this year. However, the parks don’t include one for Asian elephants. Chen Mingyong, professor of the School of Ecology and Environmental Science at Yunnan University, told Caixin that’s because the urgency to protect elephants didn’t attract enough attention at the time.

Many experts have called for the inclusion of a national park for elephants in the next group of parks, expected to be launched by 2025. Although the establishment of such a park would provide a unified plan for the land, its meaning would go far beyond that, said Guo Xinming, director of the research institute at Xishuangbanna National Nature Reserve.

“Which places are suitable for the survival of Asian elephants, which places are reserved for other animals, which places need to arrange the relocation of villagers, and what kind of economic compensation should all be given, all need to be planned as a whole,” he said.