By Guo Yingzhe, He Xinye and Shen Xinyue 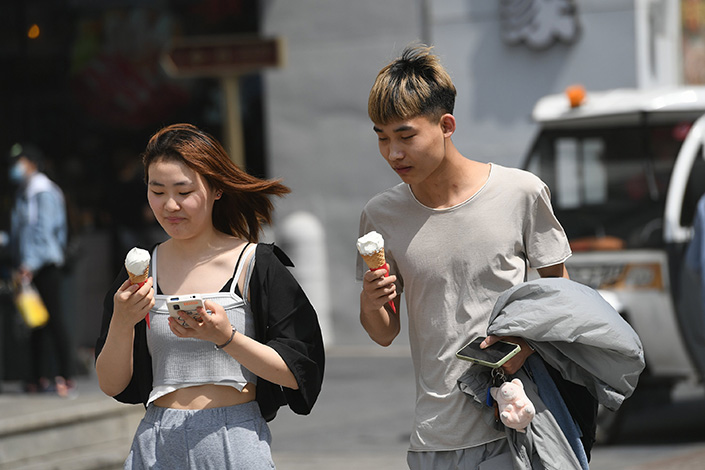 Sales of fast-moving consumer goods rose 1.6% in the first quarter this year compared with the same period in 2019, slower than the 3% growth achieved two years earlier, according to the report on the country’s shopper behavior published Tuesday. “Overall, growth is regaining traction, but remains subdued,” the report said.

The slow recovery of spending on fast-moving products reflects how consumption remains a weak point in China’s economic recovery from the Covid-19 pandemic compared with solid growth of fixed-asset investment, production and exports.

Volume was the key contributor to the sales growth as average selling prices dropped 1% in the first quarter from the same period in 2019, wrote the report, as consumers shopped more frequently with the domestic epidemic under control. The report was written by Bain analysts in coordination with those from Kantar Worldpanel, another consultancy.

Last year, the average price of fast-moving consumer products dropped for the first time in five years as consumers were more cautious and bought less expensive items, said the report. The analysts expect a weak recovery in the near future given the change in shoppers’ behavior due to Covid-19. Fast-moving consumers goods (FMCGs) are nondurable products that sell quickly at relatively low cost. Examples of FMCGs include milk, gum, fruit and vegetables, toilet paper, and over-the-counter drugs like aspirin.

The consumer market recovery was subdued partly because Beijing’s relief package during the pandemic focused more on supporting businesses and investment than handing money to households, Wang Qian, chief Asian economist at Vanguard Group Inc., a global investment management company, wrote in a Thursday note (link in Chinese). U.S. consumer spending recovered faster than China as Washington transferred cash directly to its citizens, leading to a rise in household incomes, she wrote.

Covid-19 has changed consumer preferences in a variety of ways and accelerated some existing trends, the report said. For example, ice cream, which was not popular among households before the pandemic, was bought at record rates as people wanted comfort food.

Consumers have been even more enthusiastic about health and hygiene products since the start of the pandemic, though such interest was already visible in recent years. Sales of milk have been rising dramatically after Dr. Zhang Wenhong (张文宏), a prominent infectious disease expert, last year called on Chinese people to choose milk rather than rice porridge at breakfast to bolster their body’s ability to fend off infection, the analysts wrote.