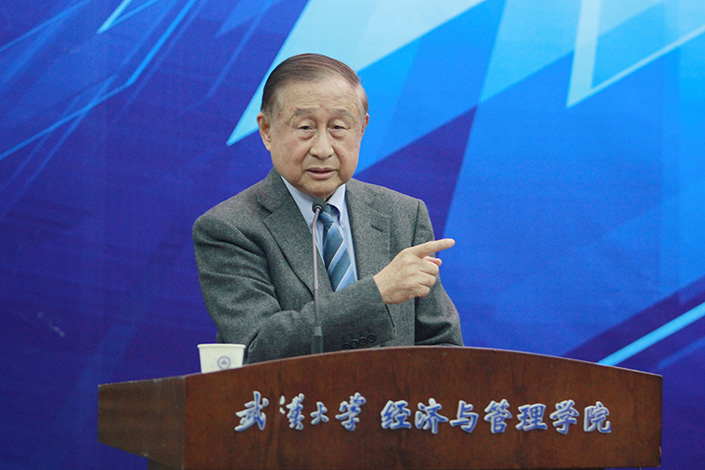 Gao Shangquan left the world at 3 p.m. on June 27. Sadly, I will no longer have the opportunity to listen to his teachings or hear his insights on China’s reform and development.

I was prepared mentally for his death, but I was still saddened by the news. To me, Gao is not only a flag-bearer of reforms, but also a great man who recognized and appreciated my talents, and when writing of him, there are a few particular moments I would never forget.

In the summer of 1984, I was about to finish my postgraduate studies and was worried about finding a good job. I got acquainted with Shi Xiaomin, who had recently been transferred from the Economic Daily newspaper to the State Commission for Restructuring the Economic System. Shi told me that the commission was preparing to establish an institute of which Gao would be in charge, and asked if I was willing to work there. I replied “of course,” so Shi took me to see Gao.

At that time, Gao, head of the research team of the commission, lived in a small two-bedroom apartment and Shi had arranged for us to meet there. Before meeting Gao, Shi specifically asked me not to mention my somewhat controversial article “Doing Justice to Money” (editor: the article criticized a popular argument in the 1980s that China’s social and economic problems were largely caused by an increasing emphasis on money. Zhang’s article argued that value systems should change to accommodate the accumulation of wealth and economic development). He warned me only to talk about the recent price reforms. That article had caused some controversy that still hadn’t subsided, and I had just written an article on dual-track price reform two or three months earlier.

To me, Gao was a senior official, but once I met him, I felt he was very approachable and he made me feel like his equal. We spoke for just over an hour and our conversation did not touch upon my controversial article. However, given his knowledge of the economics community, I assumed that he already knew about my infamous piece. In fact, in an essay from his later years, he recalled that he did know of the article, but that he didn’t think poorly of me for it. Instead, he appreciated my courage.

Shortly after the meeting, Gao arranged for Li Jun of the research team to visit Northwestern University to learn more about me. Northwestern University is a local institution, and its graduate students needed to apply separately for a place to work in Beijing. Luckily, everything went well. After graduating on Dec. 28, I joined the China Institute for Economic Reform and became one of its earliest members. Just a few days earlier, Gao’s appointment as director of the institute had just been made official, making him the founding director. His formation of the institute was one of his most important contributions to the reform.

Six months after I joined, Gao was promoted to deputy director of the commission.

In September 1990, I went to Oxford University to pursue my Ph.D. During my doctoral program, I worked for the Chinese Economic Association (CEA) and we invited Gao to give a talk at our annual conference in London.

I remember that due to financial constraints, we were only able to offer him an economy class ticket, but he didn’t care. I don’t remember the details of his report, but I still remember that his speech received great praise from the participating members of the CEA, British politicians and the business community. He also had an in-depth conversation with former British Prime Minister Edward Heath. After the conference, he visited Oxford, and I was the one who accompanied him. There and then, he asked for my opinion on the establishment of diplomatic relations between China and South Korea, and I could only guess that the top leaders were asking him to assess it. Not long after that, China and South Korea established diplomatic relations.

The Hainan conference on reform

In 1993, the Chinese Economists Society (CES), the CEA and the China Institute for Reform and Development (CIRD) prepared to co-host an international seminar in the southern island of Hainan on China’s reform. We thought that such a conference was relevant, as Deng Xiaoping had just finished his series of speeches during his southern tour.

At that time, Gao was also the director of CIRD, but did not take charge of daily affairs.

When many of the overseas economists had already accepted our invitation, we ran into trouble. Someone made a complaint about the conference to the higher-ups, CIRD told us that the conference couldn’t be held. This put Yi and me in a very awkward position, and in desperation, we wrote a joint letter to Gao.

He quickly replied and told us not to worry, and that he would do his best to make the conference could go on as scheduled. Later, we learned that Gao had assured the authorities that he was to take full responsibility for the conference. Thanks to his mediation, the conference was successfully held in Haikou on July 1–3, 1993. For this, Yi and I were very grateful to Gao, as we both knew that without his efforts, the conference would never have been held. The conference was attended by hundreds of leading domestic and foreign economists, whose views expressed at the conference had an important impact on the subsequent reforms.

Gao’s contributions to the establishment of the China Center for Economic Research (CCER) at Peking University were also significant.

At the Hainan meeting, Justin Lin Yifu, Yi and I reached a consensus to establish an economic research center at Peking University (PKU) or Tsinghua University. After the Hainan meeting, we returned to Beijing to prepare work on a proposal to show the two universities. Three of us took turns to visit presidents of the two leading universities. During these visits, both universities showed a positive attitude towards our proposal, but there was no final decision. Neither had we decided whether to do it at PKU or Tsinghua.

On Aug. 6, Yi and I paid another visit to Wu Shuqing, president of PKU. Before meeting Wu, we met with Gao, who was on good terms with Wu, and expressed our hope that he would support us in establishing an economic research center at PKU. Gao strongly agreed with our idea and promised to meet with Wu together with us and help us convince him.

When we met with Wu, Gao’s presence greatly influenced the decision-making of the university. According to the minutes I have kept, it was at this meeting that President Wu agreed in principle to “the proposal for the establishment of the China Center for Economic Research drafted by Justin Lin, Yi Gang and Zhang Weiying.”

“To take education to a new level, innovation in the management system is needed, and the center would be an experiment in this regard,” said Wu. The meeting also resulted in a consensus on several key matters regarding the establishment of the CCER, including a directorship under the leadership of the Board of Directors.

Gao has left us, but as the remarkable reformer he was, he leaves with a legacy.

I hope Gao will rest in peace. Who knows, maybe reform is needed in heaven too?

The author is a professor with the National School of Development at Peking University.