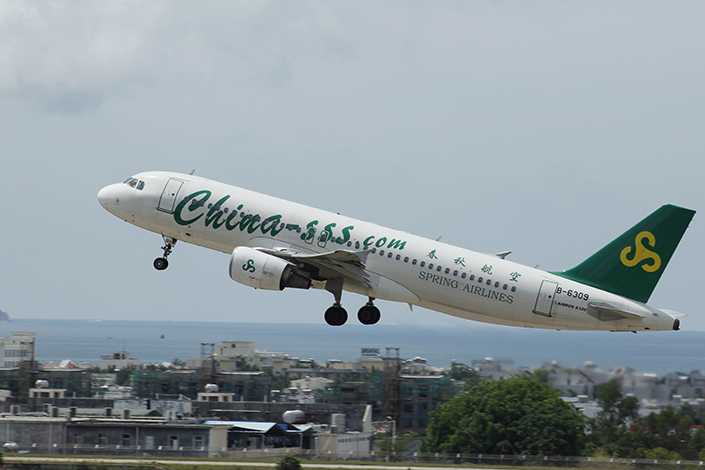 Japan Airlines (JAL) has taken majority ownership of its joint venture with Chinese budget carrier Spring Airlines Co. Ltd. through a major capital injection, after Spring made an emergency cash infusion during the pandemic last year that briefly made it majority owner, Caixin has learned.

JAL’s infusion caused Spring’s stake in Spring Airlines Japan to drop from 56% to 30%, an airline spokesperson confirmed to Caixin on Friday. The Chinese company had yet to make any formal announcement on the shareholding change as of Friday afternoon.

JAL held a media briefing on Wednesday to announce the change, saying its injection of “several billion yen” in new capital had raised its stake to two-thirds of the joint venture, qualifying it as a subsidiary of the Japanese company, Japan Broadcasting Corp. (NHK) reported on Wednesday.

Spring Airlines and JAL established their joint venture in 2012, seeking to emulate a model used by other budget carriers like Malaysia’s AirAsia, which has formed such joint ventures for the different global markets it flies to. Spring initially held about 31% of the venture, making it the single largest stakeholder, while JAL held just 5%.

Like many airlines around the world, the joint venture — which flew between China and Japan and also covered several domestic Japanese routes — suffered a major downturn last year as international travel came to a near standstill and domestic travel also dropped sharply. In its annual report for 2020, Spring Airlines said its investment in the venture had lost 329 million yuan ($51 million) in value, contributing to its 700 million yuan loss for last year.

As the joint venture struggled, Spring Airlines injected 11 billion yen ($99 million) in fresh capital into the venture last July, raising its stake from the previous 31% to 56%. It made the infusion as JAL was focusing on its own worsening finances, which resulted in the company posting a record 286.6 billion yen loss in its latest fiscal year through March 2021.

Throughout last year’s shareholding changes, Spring’s voting rights at the joint venture remained at 29.43% due to Japanese law that says foreign entities may not hold more than a third of the voting rights in any Japanese airline.

JAL believes that domestic travel demand should recover to pre-pandemic levels by next year, with international travel to follow in 2023. That should leave Spring Airlines Japan, with its close ties to China’s oldest and best known budget carrier, well positioned to recover as Chinese travelers gradually return to one of their favorite vacation destinations.

Operating out of a hub at Tokyo’s Narita Airport, Spring Airlines Japan targets mainly Chinese customers, with a fleet of six planes flying three domestic routes and six international ones as of the end of last year.

The joint venture airline has never been profitable even before the pandemic, posting losses of 5 billion yen and 2.7 billion yen in 2018 and 2019, respectively.

One analyst at a Chinese brokerage pointed out that last year’s capital injection was primarily aimed at taking pressure off the joint venture during a time of crisis for the entire industry, even as many still held out long-term hopes for the company post-pandemic. He also pointed out the venture was moving in a positive direction before the pandemic due to its shrinking losses.

Spring Airlines operates 69 international routes, with Japan as its second most popular market.