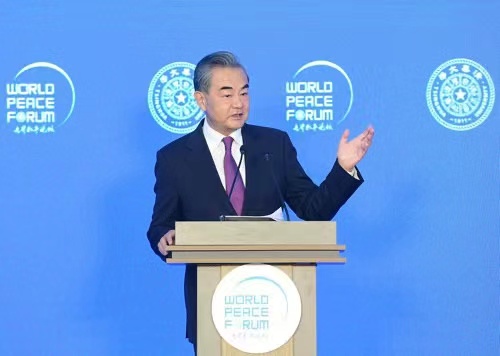 Chinese Foreign Minister Wang Yi called on Washington Saturday to guarantee a steady transition in Afghanistan after the withdrawal of U.S. troops.

“The situation in Afghanistan is at an extremely critical juncture,” Wang said at the 9th World Peace Forum hosted by Tsinghua University in Beijing on Saturday.

Wang said that the U.S. “should ensure a smooth transition in a responsible manner. The U.S. should not shrug off responsibilities and just walk away from it, nor should the withdrawal result in chaos or war.”

Late last month, the Chinese Foreign Ministry urged Chinese nationals in Afghanistan to leave the country following growing incidents of violence after the U.S. started to withdraw its troops from the country in May, after almost two decades of presence.

On Friday, U.S. officials announced the closure of Bagram Air Base, the main American military base in Afghanistan.

Washington agreed to withdraw the troops last year under the Trump administration. In April, U.S. President Joe Biden announced the withdrawal of all American troops from Afghanistan to be completed by September 11, the 20th anniversary of the terrorist attacks.

On June 3, at the 4th China-Afghanistan-Pakistan Trilateral Foreign Ministers' Dialogue in Guiyang, Wang put forward five ideas and propositions, which include maintaining intra-Afghan talks and bringing the Taliban back into the political mainstream.

Wang said Saturday that the five propositions were put forward as “we hope that all parties in Afghanistan will put the interests of the country and its people first, continue internal negotiations, and set out a roadmap and timetable for achieving reconciliation as soon as possible.”

“We are willing to work together with regional countries and the international community to promote the process of peace and reconciliation, strengthen the endogenous momentum of Afghanistan's development and reconstruction, and gradually achieve a virtuous cycle of peace and development,” he said.