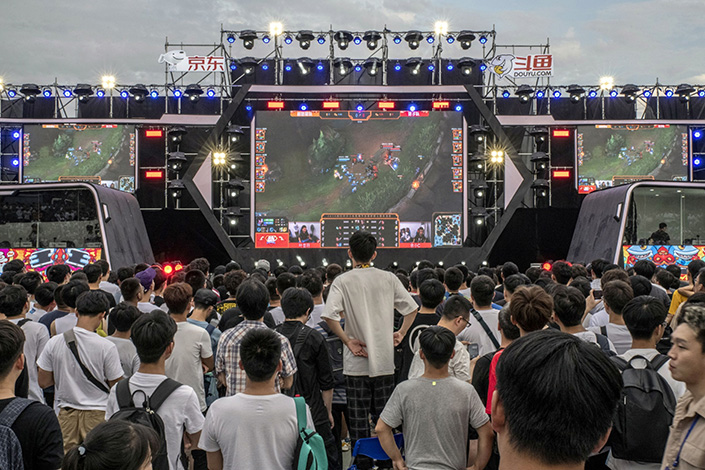 Spectators watch a broadcast of the League of Legends video game on screens during the Douyu Festival 2019 in Wuhan on June 15, 2019. Photo: Bloomberg

The deal wasn’t approved because it would strengthen Tencent’s dominance in China’s game streaming market, giving it an anticompetitive edge, the State Administration for Market Regulation (SAMR) said in a statement on Saturday. Huya and Douyu together have more than 80% of the market based on active users, they said.

Tencent will abide by the regulators’ decision and comply with all regulatory requirements, the company said in a statement Saturday.

The case marks the first rejection by the SAMR of a merger or investment deal by a Chinese internet companies. The decision is a blow to Tencent, a shareholder in both companies, and comes as Beijing steps up scrutiny over Chinese internet giants from Didi Global Inc. to Meituan. The transaction, valued at about $6 billion at the time, was negotiated before the government crackdown that began in late 2020 and was aimed at creating the country’s dominant gaming livestream leader akin to Amazon.com Inc.’s Twitch.

Consolidation would likely have improved the profitability of the business: The streaming networks live or die by the popularity of star players and the virtual tips and gifts that fans buy for them, leading to intense bidding wars for the most-recognized names.

Guangzhou-based Huya offered to buy its domestic competitor in October, proposing an all-stock transaction that would have created a combined business valued at about $11 billion at the time. Tencent would have had about 68% of the merged business’s voting shares.

But regulators announced a review of the acquisition in December as part of stepped-up scrutiny of previous deals in the internet sector. Many companies, including Tencent and Alibaba, have since been fined 500,000 yuan ($77,173) per deal, for failing to declare past acquisitions under the country’s antimonopoly laws.

The pledges made by the parties applying for approval cannot effectively reduce the negative impact of the deal on China’s domestic game livestreaming and web-based gaming services markets, the regulator said Saturday.