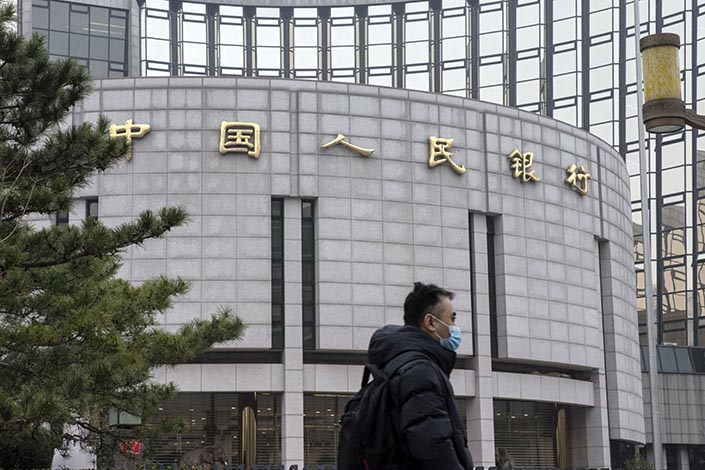 A pedestrian walks past the headquarters of the People’s Bank of China in Beijing on March 4. Photo: Bloomberg

(Bloomberg) — China’s central bank rolled over a portion of medium-term policy loans coming due, a move that confirms its intention to keep monetary policy largely unchanged.

Chinese authorities have emphasized there’s no change in monetary policy although the PBOC’s unexpected dovish turn last week have raised speculation over the severity of the nation’s economic slowdown. Some, such as UBS Asset Management and Citic Securities Co. Ltd., forecast interest-rate cuts in the months ahead.

“The operation aims to signal unchanged MLF rate and policy stance,” said Xing Zhaopeng, senior China strategist at Australia & New Zealand Banking Group Ltd. who correctly predicted the 100 billion yuan rollover. “There will be 700 billion of funds from the RRR cut left to offset tax payment shocks from today to Friday. Liquidity will be smooth.”

Market reaction to PBOC’s operation was muted. 10-year bond futures declined for the first time in four days while the benchmark CSI 300 Index slipped 0.2% at the open. The offshore yuan stayed lower on the day at 6.4654 per dollar.

China hasn’t lowered its rate on one-year medium-term lending facilities since reducing it to 2.95% in April last year and it has largely rolled over maturing MLF so far in 2021.

Replacing some of the maturing MLF with cash from the reserve ratio cut would lower funding costs for banks as the latter carries no interest rate. The cut takes effect Thursday and will release 1 trillion yuan of long-term liquidity into the economy.

The medium-term facilities coming due Thursday will be the first in a wall of maturing loans through December that total around 4.15 trillion yuan. That’s more than three times the 1.3 trillion that came due in the first half, which could provide the central bank ample opportunities to adjust liquidity levels should it choose to do so.

Most analysts still expect policymakers to be wary of adding excessive cash to avoid fueling market volatility. Chinese government bonds have rallied since last week, with traders adding leverage to buy the notes. The yield on the most actively-traded 10-year sovereign bond fell to the lowest in a year on Tuesday.

“What Beijing doesn’t want to see is a spike in cash supply, which could lead to a quick drop in interest rates,” said Lu Ting, chief China economist at Nomura Holdings Inc. “That could hurt market stability and prompt a buildup in financial leverage, which doesn’t benefit the economy that much.”