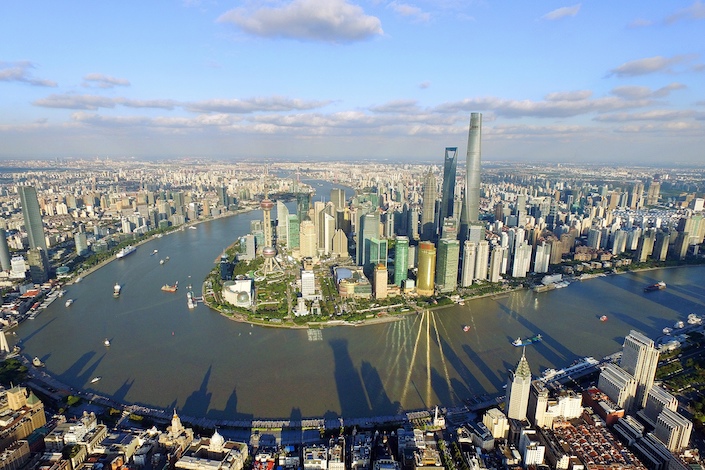 Pudong is among the earliest pilot zones established in China as a testing ground for financial restructuring.

China may further deregulate the stock market by expanding the registration-based listing system used on Shanghai’s Nasdaq-like STAR Market to the entire market, the State Council said Thursday in a document.

Authorities are also studying whether to bring market makers into the tech-savvy STAR Market and allow qualified foreign institutions to trade STAR Market stocks in yuan.

The initiatives are part of a set of guidelines issued by the State Council, China’s cabinet, to transform Shanghai’s Pudong New Area into a pioneer zone. The document maps out plans to introduce further financial opening and market restructuring pilot programs to turn the Pudong district into a business and technology powerhouse.

Located on the eastern bank of Shanghai’s Huangpu River, Pudong covers more than 1,200 square kilometers, about a fifth of Shanghai. The district is among the earliest pilot zones established in China as a testing ground for financial restructuring. It is now home to most of Shanghai’s iconic skyscrapers.

The guidelines issued Thursday consist of a wide range of initiatives and policy incentives to enhance Pudong’s competitiveness in industries such as artificial intelligence, semiconductors, aviation and biotechnology. Companies with key technologies will get a cut in corporate income tax rates from the current 25% to 15% in the first five years after business registration, according to the document.

Preferential tax policies will also be studied to encourage investment and entrepreneurship in Pudong and support institutions to carry out research and development, said the guidelines.

A slew of financial market-opening initiatives will be studied for Pudong, according to the document. The district will take a pioneering role in exploring offshore yuan trading and new financial investment products. The local stock and futures exchanges would be encouraged to deregulate markets to launch more derivatives.

Pudong will also be the pilot zone for exploring the possibility of making the yuan fully convertible and expanding foreign investors’ access to China’s bond market, the document says.

By 2035, Pudong will build up a modern economic system and governance capacity with competitiveness among the best in the world. By 2050, the district will become an important global powerhouse with high attractiveness, creativity and competitiveness, according to the document.