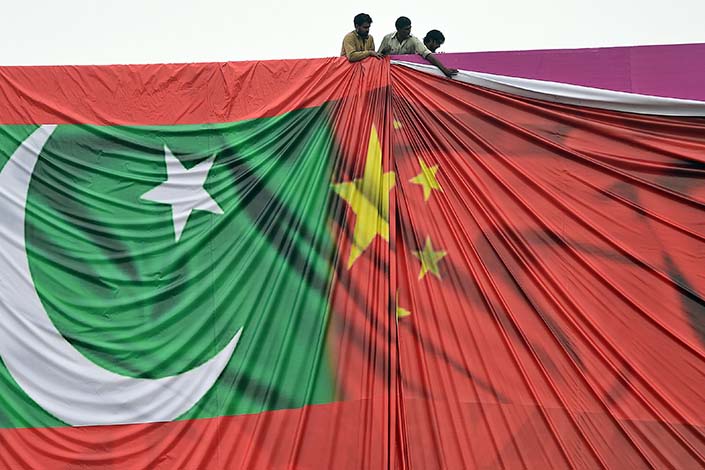 Pakistani laborers prepare a welcome billboard featuring the Chinese and Pakistani national flags ahead of the forthcoming visit by Chinese President Xi Jinping in Islamabad in April 2015. Photo: Bloomberg

(Bloomberg) — China Gezhouba Group Corp. nullified its decision to terminate Pakistani employees and will resume construction on the Dasu Hydropower project days after a bus carrying people to the location exploded, killing 12 including Chinese citizens.

“Matters regarding security and execution of the project are being looked into, and the relevant authorities from Pakistan and China are in close contact on the same,” Pakistan’s Foreign Ministry spokesman Zahid Hafeez Chaudhri said in a statement Sunday. “Both Pakistan and China remain committed to timely completion of Dasu Hydropower and other projects being undertaken with Chinese cooperation.”

China last week expressed shock over the bus explosion and called on the South Asian country to protect projects valued at tens of billions of dollars. The bus was carrying 32 people to the dam and hydro-electric project in Dasu, near the border with China. China Gezhouba had halted work after the incident and laid off all but the most essential Pakistani employees, Pakistan’s Geo TV had reported.

Concerns are mounting about an advance by the Taliban in neighboring Afghanistan, which threatens to disturb peace across the region. At particular risk is the $60 billion in projects in the China-Pakistan Economic Corridor, or CPEC, a crucial part of President Xi Jinping’s wider Belt and Road Initiative.