Explosion Kills Nine Chinese and Three Pakistanis on a Bus 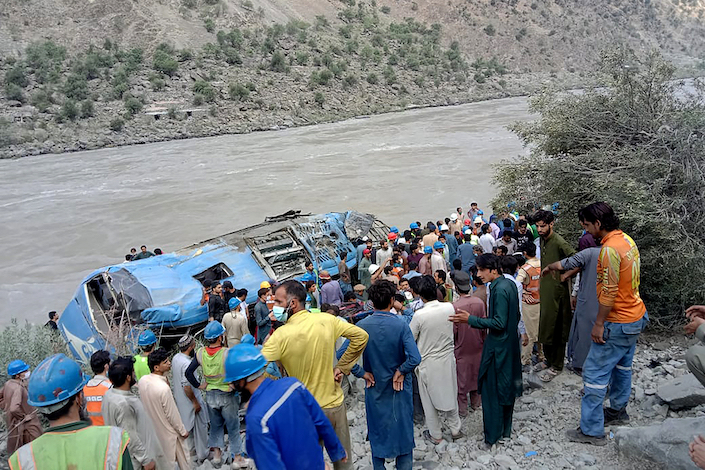 An explosion killed nine Chinese and three Pakistanis on a bus in Pakistan. China and Pakistan differed sharply over what happened.

An explosion on a bus in northern Pakistan killed nine Chinese nationals and three Pakistanis while injuring dozens more Wednesday morning. Pakistan and China differed sharply over what happened.

In Beijing, Chinese Foreign Ministry spokesman Zhao Lijian blamed a "bomb attack" for the Chinese casualties. The bus was carrying more than 30 Chinese engineers to a hydroelectric project at the Dasu Dam in Upper Kohistan when the blast occurred.

In Islamabad, the Pakistani Foreign Ministry blamed a "mechanical failure."

"This morning a bus carrying Chinese workers in Khyber Pakhunkhwa Province plunged into a ravine after a mechanical failure, resulting in leakage of gas that caused a blast," the ministry said in a statement.

Chinese nationals had previously been targeted by separatist militants in Pakistan. The Baloch Liberation Army, a militant group based in Afghanistan, claimed responsibility for attacking the Chinese consulate in the southern city of Karachi in 2018.

"China is shocked by and condemns the bomb attack in Pakistan's Khyber Pakhtunkhwa province which caused Chinese casualties," Zhao said during a press conference in Beijing.

"China has asked the Pakistani side to thoroughly get to the truth as soon as possible, arrest the perpetrators, severely punish them and earnestly protect the safety of Chinese personnel, institutions and projects in Pakistan," Zhao said.

Pakistan’s Foreign Ministry said "further investigations are underway," and Pakistan "is closely in contact with the Chinese Embassy for coordination and facilitation."