Blog: The New York I Saw Was Not the Shining Metropolis I Had Expected 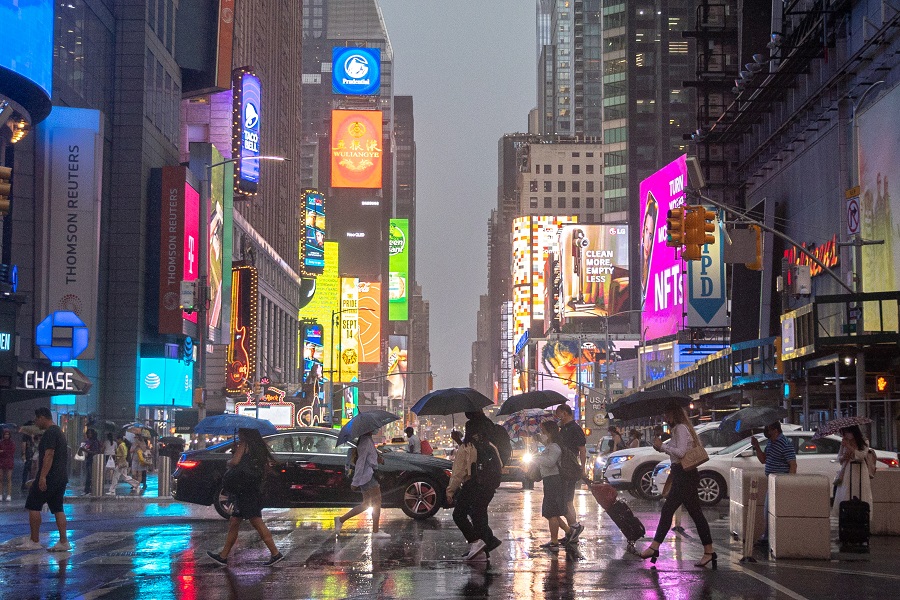 Chinese economics professor Li Jingkui is pensive as he visits New York City for the first time. Rather than the romanticized versions of the city he had read about, the New York he encounters in Flushing, Queens, is gritty and a whole other reality. But he reflects that as societies and cultures continue to evolve, fighting for dominance in a state of chaos, the side they show to the world will sometimes be different, but always real.

It’s now 10:30 a.m. on Jan. 6. I’m sitting in the main hall of John F. Kennedy International Airport in New York, waiting to check in. The hall is quite empty and the few people there have a cosmopolitan New York City air about them. But traces of China are noticeable. I look up and there’s a huge banner advertising Zhejiang’s Yiwu wholesale market of small commodities.

Just two days ago on Jan. 4, our driver, a man surnamed Yi, set off from Boston at 4 a.m. to take me and two other Chinese academics to New York. The latter separately visited Massachusetts General Hospital and Boston Children's Hospital. Yi left East China’s Fujian province for Boston four years ago. He now owns a house in Quincy, where many Chinese live. In his early 30s, he is already a father of three.

During the trip, we talked off and on about his life in the U.S. “One word sums up the life of a Chinese in the U.S.: ‘Boring!’ Everyone heads home when the sky gets dark at five or six in the evening and sleeps. China is different. You can shop in the malls and eat supper. In the U.S., you can earn more money, but life is absolutely boring,” he said.

Although Yi appears to disparage the American lifestyle, he still enjoys living in the U.S. “In America, as long as you are willing to work hard, you won’t go hungry and can even lead a good life. But if you’re thinking about having a windfall, chances are, it’s not going to happen. There are laws in the U.S. and interpersonal relationships are simpler here. It’s suitable for people like me,” he explained.

“Who doesn’t wish that interpersonal relationships are simpler!” I thought to myself as I slowly dozed off.

When I opened my eyes again, Yi pointed and said, “This is New York.”

I quickly looked out the window. All that Chinese authors had written about New York — the romantic poetry, grand history and majesty of the Statue of Liberty — came to mind.

But what did I see? I rubbed my eyes. Litter was everywhere as we made our way to Flushing, Queens to take our Covid-19 nucleic acid and IgM antibody tests at a clinic. Neither the roads nor the houses were neat and tidy. Upon entering Flushing, it was as if we had arrived in a suburb of one of China’s second- or third-tier cities, or some tiny county of an unknown tier. This was where the Chinese congregated. Chinese words were plastered everywhere. Chinese, black Americans, Indians, and Mexicans walked the streets. There were very few white Americans.

“There are a few Chinese districts in the New York City borough of Manhattan, and also a few where mostly Mexicans and black Americans have settled. The area where most white Americans gather is a few streets away from here.”

He added, somewhat embarrassed, “The places where Chinese gather are usually dirtier. It is the same anywhere in the U.S.”

This was my first impression of New York. Alas, because I was returning to China during the pandemic and would not be able to move freely, this would be all of New York I’d be able to see.

In none of the books I’d read about New York did it look like this.

When we idealize a place

Chinese-American artist Chen Danqing was based in New York for over a decade. In the preface of his book “Random Notes from New York” (纽约琐记), he wrote: “Missives from abroad can sometimes be funny. For example, if I take a photo in front of the Statue of Liberty and send it to my relatives in China, that image would be as real as it gets. Tucked under the glass pane of a tabletop, my relatives would see me standing below Lady Liberty’s robe, smiling all day and night throughout the four seasons. Isn’t that so? You can’t deny that. But when I returned home and occasionally saw the photo, I felt that the person in the photo was not me. That was just a moment when the quiet click of a shutter froze me and the statue in time for one-hundred-and-twenty-fifth of a second.”

When I first read this paragraph, I did not think much of it. I just felt that the book indeed contained “random notes about art and life” but not necessarily about New York. But if the words “New York” were removed from the title and the book was renamed “Random Notes about Art and Life”, I guess not many people, including myself, would be interested in reading it. “Random Notes From New York” — what a charming title.

Before I came to the U.S., I read numerous books about the country through the eyes of the “Lin Da couple” (the pen name shared by a Chinese-American couple, Ding Hongfu and Li Xiaolin), as well as records of the American life written by Chinese writer Liu Yu. These big-name writers are masters of their craft. The words they chose and the way they composed their sentences constructed a vivid image of the U.S. for their readers.

This is what Chinese writer Mu Xin wrote about Columbia University in New York: “A concert was just held under the statue. Chairs and a few instruments that can take the sun lie about (another session will be held at night). Paper, food wrappers and empty beverage cans are strewn across the stone steps; those that can be blown away flail, roll around, pause and set off again… Columbia University seems jaded. But this is just how it appears on the surface. At its core, it is still very much alive. Each building is a hive of endless passion and activity. There are several floors underground as well; everything is interconnected. Around the clock, everyone is busy with analysis, calculations, predictions or letting their imaginations take flight. The place is a hive of unbridled energy, a mill of intellectual thought, a witch’s kitchen of theory and experiment.” What a beautiful description! Even rubbish lying on the ground can be described in such a poetic manner. This is New York in the eyes of the literati.

A stepping stone for immigrants

The legendary history of New York is said to have begun in 1626 when the Dutch bought the island of Manhattan from Native Americans for around $24.

Four hundred and twelve years have passed since Henry Hudson of the Dutch East India Company made his first voyage to Manhattan in 1609. In 1626, the ship Arms of Amsterdam arrived in Manhattan. They bought the Island Manhattes from the Lenape Indians for 60 guilders, equivalent to approximately $24 back then.

The so-called “purchase” of the land is actually very controversial as the Dutch and Lenape Indians have very different understandings of land ownership. No matter how fair and legitimate the Dutch thought the transaction was, the Lenape Indians firmly believed that land is a public asset free for all to use.

It is highly likely that the latter did not receive cold, hard cash, but rather 60 guilders worth of hoes and cloth as a symbol of goodwill for white people to settle there. Never would they have thought that they would no longer have a share of Manhattan. Earlier in 1625, the Dutch had already started building Fort Amsterdam on Manhattan Island, which was later called “New Amsterdam”.

Less than 40 years later in 1664, New Netherland surrendered to the British and the Dutch governor gave up New Amsterdam to them. The British then renamed it New York, and that is how the metropolis of today came to be.

New York, especially Manhattan, has always been the first stop for immigrants when they arrive in the U.S. However, it is also a place whose owners have changed from generation to generation. The Dutch, British, Jewish, and Irish all came here one after the other and worked hard until they found their place in society. After that, they began moving westward, leaving this crowded, dirty place to new immigrants. Today, the Chinese, Mexicans, Indians and black Americans finally have their turn as owners.

The history of New York is a thick book made up of many chapters. That of the U.S, even more so. Generations of people, be they British, Dutch, or the Chinese, Mexicans and Indians of today have come here and fought for a place in society, before gradually merging into the torrent of life.

Today is my last day in the U.S. I looked at the country through the lens of New York, and was in awe of the human species.

Approximately 70,000 years ago, Homo sapiens walked out of Africa for the last time. They defeated Neanderthals, Homo erectus, and other types of human-like species, and ruled the world. Homo sapiens scattered themselves around the world. Different groups were distinguished by small differences at the beginning, but in the end, they formed different cultures and countries with huge differences.

Whether it’s human destiny or the fate of the various cultural groups, perhaps the Creator did not set the final endpoint of evolution. While every culture claims to represent the future of mankind, the world lurches forward in a state of chaos, proving all prophecies futile.

In this sense, the New York and U.S. that I see is not necessarily false, in the same way that the U.S. in the eyes of Mu Xin and the Lin Da couple also may not be untrue.

They are all real, and this is the interesting thing about this world.