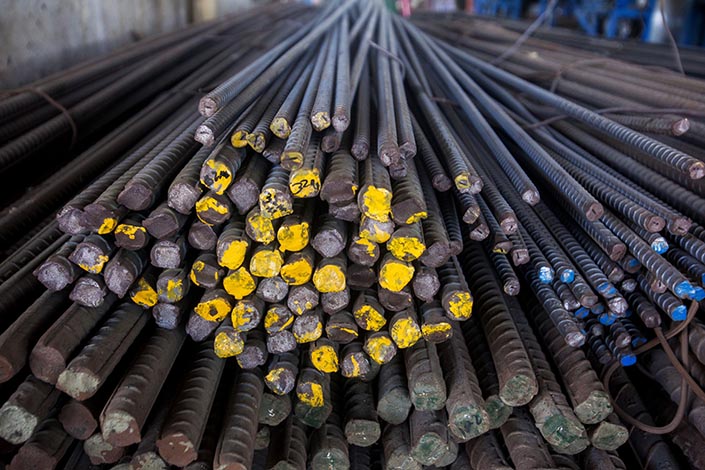 Commodity prices have surged this year in China. Photo: Bloomberg

Inventories of reinforced steel bars, a key construction material, started rising before the arrival of the summer slow season, and China’s State Council had warned repeatedly on price increases, he said in an interview.

“Our models were flashing strong signals of a reversal,” said Lee, the general manager of Shanghai-based Regan Group, which manages about 10 billion yuan ($1.6 billion). By the middle of May, rebar prices began to plunge, leaving Regan’s CTA No. 3 fund up 125% for the month.

As China battles commodity prices which threaten to derail the nation’s economic recovery, the quantitative offerings of so-called commodity trading advisers have outperformed, drawing a flood of investor interest. That’s also boosted the fortunes of David Harding’s Winton Group, one of the most prominent global names in the space.

Local assets under management at Winton surged 50% this year to 6 billion yuan, according to a person with knowledge of the matter, helping make the fund a rare success among dozens of international names jostling for attention in China’s crowded hedge fund market.

And while performance for CTAs — hedge funds specializing in buying futures and options, frequently tied to commodities — has dipped in recent weeks, homegrown players like Hangzhou-headquartered Zhejiang Bailu Investment Management Co., known as Egret Quant, point to a tide of new money with even retail investors now wanting in.

CTAs tripled product launches in China through June 20 compared with last year, according to Shenzhen PaiPaiWang Investment & Management Co. Focused on riding trends in financial futures, the funds often perform better amid volatility their models are designed to capture.

In addition to rebar, which is traded more in China than anywhere else, Lee also shorted hog futures in May amid pork price declines and rising supplies, he said. That helped to lift the overall CTA strategy’s five-month return to 35%, ranking it the top performer among CTAs managing more than 5 billion yuan, according to PaiPaiWang data.

The first public signal that authorities had become serious about clamping down on this year’s commodities boom came on May 12, when the State Council called for “adjustments to deal with the excessively rapid rise in commodity prices.” Premier Li Keqiang delivered an even more pointed warning a week later, saying that targeted measures would be taken to “screen abnormal transactions and malicious speculations.”

Their concerns sprang from a broad-based commodities boom that spurred prices of raw materials from steel to soybeans to multi-year highs, helping commodity traders and speculators make billions.

Between Chinese authorities trying to force prices lower and bets on a global recovery from the pandemic pushing them higher, some traders have been able to profit from the volatility.

Much of the year’s price gyrations, particularly in black metals like coke and rebar, were captured by computer models at Hangzhou-based Qihe New Asset Management, founder Shen Liang said. The company’s Chenxing No. 1 had the best returns of all CTAs in China in the first half of the year with a return of more than 400%, according to PaiPaiWang.

The volatility is also a boost for foreign asset managers, which have been grappling with a lack of distribution channels and brand recognition after gaining entry to China’s 4.8 trillion yuan hedge fund market a few years ago. Further relaxations that opened up China’s futures markets in everything from coal and soybeans to silver increased its appeal for U.S. and European CTAs.

Inflows at Winton have been the strongest since China’s 2015 stock market crash and a commodities boom that followed, a person familiar with the matter said, declining to be named discussing private information. A spokesperson for Winton did not respond to an emailed request for comment.

Egret Quant, which manages about 9 billion yuan, stopped accepting new cash for its pure CTA products in late June, after a surge in assets, to protect performance and save trading capacity for other multi-strategy products.

“Investors have been flocking to buy into CTA funds since late last year, especially those that have solid performance,” said Du Xu, head of derivatives at Egret Quant, adding that previously most investors were long-term and institutional. “Nowadays we’re seeing even retail investors putting in requests.”

Still, performance can be unstable. CTAs averaged a 1% loss in June, ceding the title of the year’s best-performing strategy to event-driven funds, according to PaiPaiWang. And managers are split on what the second half of the year holds.

For the remainder of the year, CTAs still have plenty of trading opportunities as macroeconomic uncertainties keep volatility levels high, Egret Quant’s Du said. Qihe’s Shen is more cautious. Since June, the company’s macro fund has stopped holding long positions in commodities, he said, citing the gradual shift in monetary policies in China and the U.S. away from their loose pandemic mode.

“That means the most favorable period has ended,” Shen said.