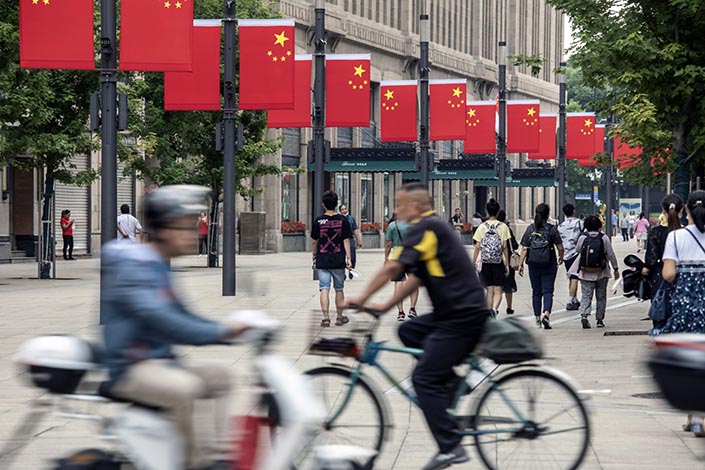 (Bloomberg) — China’s economy continued its stable pace of recovery in July, though there were some signs of weakness as property sales slumped, small business confidence slipped and the stock market fell.

That’s the outlook from Bloomberg’s aggregate index of eight early indicators, which remained unchanged in expansionary territory in July for the third consecutive month.

The economy’s V-shaped rebound has steadied recently and showed more balance as consumer spending picked up. Officials expect a stable recovery in the second half of the year, but have also warned of downward pressures on growth, including a likely slowdown in trade.

For now, global demand remains strong. South Korean exports, a barometer of world trade, rose by one-third in the first three weeks of July, a sign that virus variants have yet to be a major drag on demand.

There were also positive signs for China’s factory-gate inflation, with Bloomberg’s price tracker easing in July from its highest level on record in June, suggesting government steps to boost supply of some commodities and stabilize their prices began to have an effect.

Real estate sales cooled in July after the government embarked on a wave of steps to curb surging prices, while car sales stayed muted.

Confidence among small and medium-sized enterprises slipped in July, according to a survey of more than 500 companies by Standard Chartered Plc., with both the “current performance” and “expectations” sub-indexes moving lower, suggesting that SMEs’ underlying momentum turned weaker entering the third quarter.

“The slowdown was more pronounced for SMEs in the manufacturing sector,” Standard Chartered economists Hunter Chan and Ding Shuang wrote in the report. “Softer domestic demand weighed on sales and production for domestically focused SMEs.”

The services industry continued to recover, with both performance and the profitability outlook improving, they wrote.

The official purchasing manager indexes for manufacturing and non-manufacturing industries will be released next week, and are expected to be largely unchanged from June, suggesting a steady expansion in the economy.