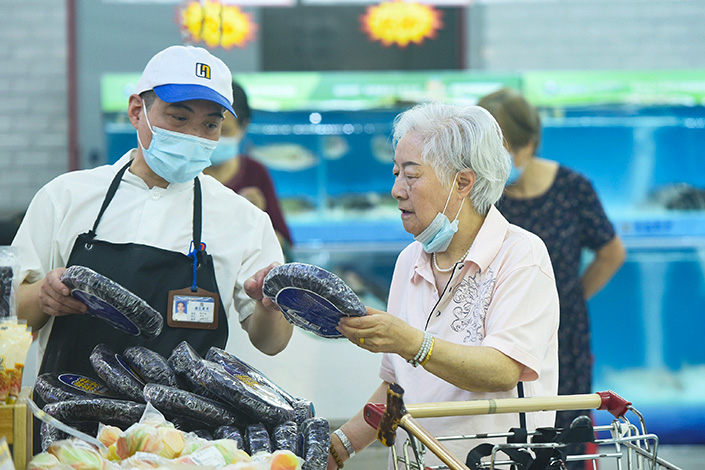 A breakdown of the CPI showed that food prices dropped 1.7% year-on-year, compared with a 0.3% increase in May. Photo: VCG

Beijing’s measures to stabilize commodity prices appear to be paying off as inflationary pressure softened in June, with growth in both consumer and factory-gate prices slowing for the first time this year, government data showed.

The producer price index (PPI), which gauges changes in prices of goods circulated among manufacturers and mining companies, rose 8.8% year-on-year in June, edging down from 9% in May, according to data (link in Chinese) released Friday by the National Bureau of Statistics (NBS).

The increase is the second biggest since September 2008, following a spike in May and largely in line with the median estimate of 8.6% in a Caixin survey (link in Chinese) of economists. The index increased 0.3% month-on-month in June, the smallest in 2021 and down sharply from 1.6% in May.

The slowdown in the PPI appears to show the first signs that Beijing’s efforts to cool off a surge in commodity prices are taking effect, after the gains fueled price pressure on China and stoked concerns about a global inflationary spiral.

In recent weeks, Beijing ordered state-owned enterprises to reduce their exposure to overseas commodities markets, launched probes into market supply and speculation, and released metals from the national strategic reserves in a bid to rein in domestic commodity prices.

“Looking ahead, the current surge in PPI inflation will stabilize in the coming months and CPI (consumer price index) inflation will stay muted,” Jing Liu, a senior economist at HSBC Bank PLC, wrote in a report published after the data’s release. “After all, the PPI inflation is largely shaped by commodity prices, while the disinflationary effect from the influx of some 10 million college graduates a year has anchored the wage pressure.”

The CPI, which measures changes in prices of a basket of consumer goods and services, increased 1.1% year-on-year (link in Chinese) in June, down from 1.3% in May, NBS data showed. The gain pipped the median estimate of a 1.2% rise in the Caixin survey.

Consumer prices stabilized in June as the overall supply of consumer goods recovered. A breakdown of the CPI showed that food prices dropped 1.7% year-on-year, compared with a 0.3% increase in May. The falling prices of pork, a key driver of consumer inflation, continued to offset the rising cost of many other foodstuffs. The tumbling prices recently triggered state buying of the staple meat as the market became oversupplied in the wake of African swine fever.

The core CPI, which excludes food and energy costs, rose 0.9% year-on-year in June, leveling off from the previous month.

Lately, China has been stepping up efforts to stabilize domestic markets by reining in consumer and commodity prices, and curbing speculation, as it steers its economic rebound from the pandemic.

On July 2, the State Administration for Market Regulation released a draft regulation (link in Chinese) detailing penalties for a range of illegal pricing activities, including dumping, price discrimination, price gouging and failing to comply with price control measures by the government.