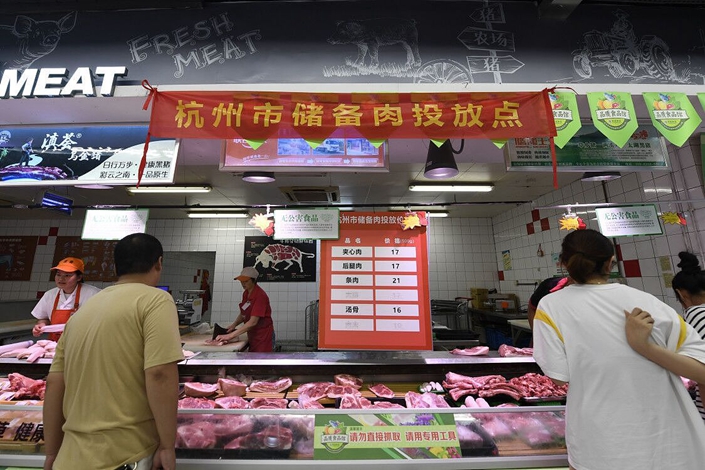 For many Chinese people, nothing completes a festive dinner quite like a juicy cut of pork. But as the country gears up to celebrate the weeklong National Day holiday — and with it the 70th anniversary of the People’s Republic — pigging out has become costly.

In August, pork prices surged at their fastest pace in more than eight years, increasing 46.7% year-on-year and contributing 1.08 percentage points to growth in the consumer price index.

That’s because China’s swine herd continues to be decimated by a deadly pig disease. Since it was first reported in China last summer, African swine fever has killed around one-third of the country’s hogs and caused an estimated $140 billion of direct losses.

The crisis has prompted renewed interest in China’s vast strategic reserves of frozen pork and live hogs, after authorities released thousands of tons of pig meat onto the market in recent weeks to guarantee supply ahead of the holiday.

The Chinese government considers pork so important to economic and social stability that it maintains a special supply of it. But where does this system come from, and why does it exist? And can it really help?

The answer appears to be: Don’t expect China’s pork reserves to scratch the surface. At best, the modest trove allows the government to release small batches and keep a lid on prices.

Many nations stash strategic hordes of things like oil, medical supplies and grain for a rainy day. But the Category 5 storm raging in China’s pork industry has turned eyes to the stashes of pig meat and hogs that China’s national and regional governments keep in freezers and farms around the country, tapping them when supply is threatened.

China’s state pork reserves are run by the China Merchandise Reserve Management Center. The government has strict requirements for live hogs kept for the reserves. It pays each reserve “base” an annual subsidy of 300,000 yuan per 10,000 pigs to compel them to release a certain amount of meat when the government deems it necessary. They boast that live pigs can be transformed into ready-to-cook cuts of meat within 45 minutes.

Peng Shaozong of China’s National Development and Reform Commission said at a Sept. 11 press conference that China’s pork reserves had reached a reasonable level. But Nomura chief China economist Ting Lu points out that holding a reserve of a perishable good can be tough. Pork can only be stored frozen for six months, and in practice reserves are rotated every four months for freshness and quality. Combined with the swine fever hit, “pork reserves are unlikely to be substantially built up over this period,” he says.

While the exact sum is a closely held secret, Nomura’s “conservative” estimate is that there are around 200,000 tons at the national level, and about 150,000-200,000 tons held by provincial governments.

China has released three 10,000 ton batches of pork in recent weeks ahead of the National Day holiday in a bid to control surging prices.

But the amount of pig meat that China chomps through in a year makes 30,000 tons look puny. The U.S. Department of Agriculture estimates China will consume 50.5 million tons of pork in 2019. By Caixin’s calculation, each 10,000 ton batch would have kept pork on tables across China for less than two hours.

“In our view, the impact of pork supply from the state reserves on pork prices should be short-lived and negligible, like a drop in the bucket,” Lu says.

Zhu Zengyong, an often-cited pork expert with the Agricultural Information Institute of the Chinese Academy of Agricultural Sciences (CAAS), said such releases before holidays like National Day and the Lunar New Year are pretty common. But releasing three batches shows the government is working overtime to guarantee supply and to undercut those who would inflate prices for personal gain.

Said Zhu: “The pork price of national reserves is lower than the fresh or chilled pork in (the) normal market.” While the releases are small, they tell consumers “we have enough … and on the other side the pork or pig trader not to take… advantage (and) intentionally raise the price.”

History of the reserves

The Chinese government has loosely supported meat-reserve initiatives since the 1970s, but it wasn’t until 1996 that it set up a nationwide reserve scheme tasked with stabilizing meat prices during emergencies.

The system in its current form dates to 2008, after an epidemic of so-called blue-ear disease ravaged pig stocks, according to The Washington Post. That crisis sent pork prices soaring nearly 87% in one year, drove the consumer inflation rate to its highest point since 1996, and prompted China to take out what was at the time the largest ever single-year import of pork by one country.

For China’s dominant ethnic group, the Han, pigs and pork have been part of farming and culture for centuries. Even the Chinese character for “home” is made up of the character for “pig” standing under a stylized roof.

Until a few decades ago, pigs were mostly raised for their manure, not for their meat. Farmers prized pigs for their ability to turn kitchen and agricultural waste into copious amounts of fertilizer which could then be spread on their fields. Pork was a luxury generally only enjoyed at festivals and on other special occasions.

But after China embarked on its sweeping economic reforms in the late 1970s, pork became intertwined with national narratives of development and wealth. The average Chinese person eats around five times as much meat today as they did in the early 1980s, and around 60% of that is pork.

Pork demand is especially high around major holidays like National Day — which this year will play host to a bombastic parade celebrating the 70th anniversary of the founding of Communist China. As the government prepares to congratulate itself on China’s economic transformation, it’s little wonder it is anxious to ensure people can continue to put pork on the table.